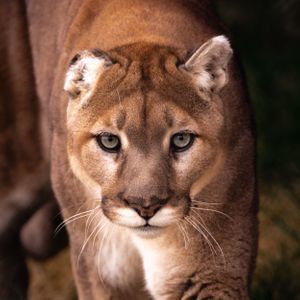 In fall 2009, Lakai’s mother was illegally shot in Alberta and he was taken from the wild when he was less than 3 months old. Prior to coming into human care, he developed frostbite on his right ear, causing him to lose most of it. Lakai was first given a home at Calgary Zoo, and then transferred to the Dallas Zoo where he was introduced to Apollo, where the two males spent the next 7 years together.

In January of 2018, the zoo made the decision to permanently close the oldest enclosures in their park - where the two mountain lions were living - and approached CARE to give them a home where they could retire.

Lakai adjusted wonderfully to his new home. He is perfectly happy enjoying a quiet life curled up in a nook or watching the cows on the neighboring property. He is not a very social fellow, but he has his favorite people and will grace them with his handsome presence - usually looking for treats.