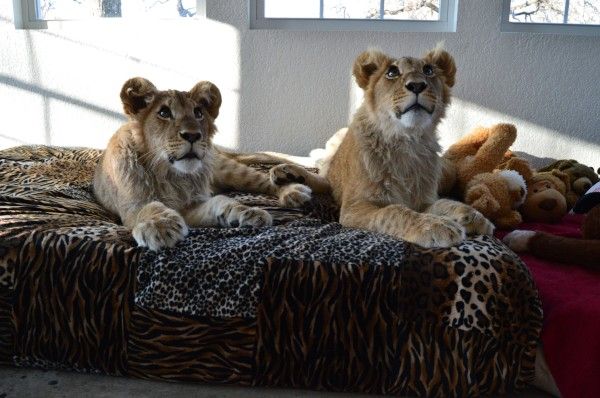 If you have been keeping up with lion cubs Araali and Zuberi, then you know about the illness that they have been battling for months, commonly known as Wobbler’s Syndrome. In case you haven’t, we wanted to give everyone a little background and update on how they are doing. But most importantly, we need to recognize all the amazing people that have come to the boys’ aid when they needed it the most.

Shortly before Christmas, Araali and Zuberi both experienced difficulty walking and measures were taken immediately to try and determine the cause. Receiving the boys’ diagnosis was devastating news – our little lion cubs, whose birth was a miracle in its own right, were plagued with Wobbler’s Syndrome, a horribly debilitating condition which affects bones which then affects the nervous system. Due to the bleak outlook of the diagnosis, it was even suggested by some that we euthanize our little ones as soon as possible to save them from their near-certain degenerative fate. As you probably already know, that is not our way at CARE. As long as our animals are not experiencing unreasonable and unnecessary pain, we will do everything we can to find a way to help them. Even with this seemingly insurmountable challenge in front of us, we had hope. Within hours of the announcement that the cubs were headed to Texas A&M for diagnostics, thousands of dollars suddenly appeared in CARE’s PayPal account from our supporters world-wide. At times like that, seeing the cascade of immediate support for any of CARE’s animals is humbling and incredibly uplifting, knowing that these special animals have touched the hearts of so many gives us strength to do what we do. 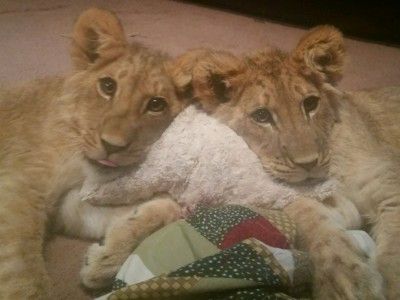 Early December, when the boys were first diagnosed

It has been a few months since their initial diagnosis, and the fight to simply give the boys a chance at a future hasn’t been an easy one. Sleep has been scarce (for us humans), the house where they have needed to spend time being observed has seen better days, but overall, the 80 pound cubs are doing well. Wobblers has made Araali and Zuberi less mobile (they’re pretty much limping all of the time, sometimes on multiple legs) and it’s made them more prone to injury. Normal lion cubs are rough and tumble by nature. They can usually withstand some pretty hefty knocks. With Wobblers however, minor bumps, tumbles, and head-jerks can cause injury which has had a negative looping effect. Any injuries can elevate their pain, the increased pain makes them stressed, anxious, and “jumpy” which then increases the likelihood of further injury. It’s a nasty cycle which we are fighting to control. Stress reduction is pivotal to their improvement, and they are never left alone - we even sleep with them at night. If for some reason they were to get scared in the night and perhaps move too quickly or run into something, it could be catastrophic to their recovery. They have good days and they have bad days, but the good ones are starting to outweigh the bad.

Since the boys are becoming more stable, a long term treatment plan had to be devised. First things first-research. It’s a good thing all those sleepless night allowed more time to search the web and talk to the top doctors and researchers in the world about Wobblers treatments. We immediately placed the boys on anti-inflammatory medications and loads of additional vitamins and minerals (lots of Calcium). Another thing they desperately needed was sunlight so they could absorb essential Vitamin D. They were spending so much time in the house due to their limited mobility and their need for a controlled environment, not to mention the fact that the cold weather this time of year caused more discomfort for them, that they were getting rather accustomed to their new plush accommodations with soft blankets on top of thick carpet in front of our den’s big TV & fireplace.

Araali could get himself outdoors when we coaxed him, but Zuberi, try as he might, couldn’t make the trip, so we started carrying the 80 pound cub inside and outside. The most terrifying period of this whole ordeal was the first week of Zuberi’s symptoms. He was in such bad shape, he literally couldn’t walk ANYWHERE. He crawled & he shuffled, but he couldn’t lift himself up off the ground. There were times where we would watch him struggle without improvement, and we couldn’t help but think the battle was being lost. There were a few tears those first days to say the least. More research necessary. More sleepless nights. More furniture eaten.

We have been weighing our options and making decisions. The use of anti-inflammatory medications long term could be detrimental to the lions’ internal organs, but how will we otherwise be able to control their pain and keep their inflammation under control? Enter Assisi Animal Health. The company has developed a special collar which utilizes a new technology- Targeted Pulsed Electromagnetic Field Therapy or tPEMF. This technology was developed to treat a laundry-list of conditions in animals including Wobblers Syndrome! The wonderful people at Assisi donated 2 collars for the boys, and in return we report on all of their progress. It’s not every day you get to test your new products on lion cubs with legitimate long-term needs, so they were truly excited to help. We started their loop-treatments before the New Year and their improvement has been noticeable. We are hoping to take them off of the anti-inflammatory medications completely if we continue to see improvement. This will, of course, all depend on how many 15 min treatments we can get in a day. The main area of concern is their cervical spine (their neck vertebrae) which means they have to wear the Assisi loop on their neck for 15 straight minutes, 4 times a day – a delightfully difficult task to accomplish with frisky lion cubs. They have to be sleeping or very distracted for the collar to be slipped on without them noticing the magical new chew toy with a pretty green light. 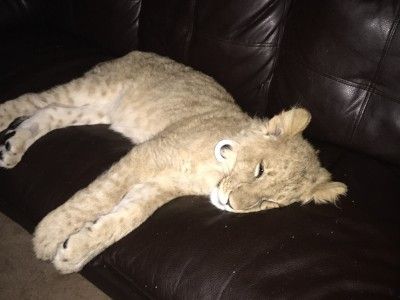 Our final issue has been their long term housing situation. Obviously, these are growing lions, not domestic kittens and them living in the house was incredibly problematic. As their health improves, they have become more active, bold, and destructive. They are a greater danger to the dogs and domestic cats that live in the house as well as a threat to the two tiger cubs who have to be kept separately from the lions. The boys were also not getting enough sunlight in the house, but sometimes it is too cold or they are too fragile to go outside. Additionally, they are now 80 pounds. Carrying them outside when they have difficulty moving on their own will soon not be an option anymore. They cannot be left alone in the house for a second and the lack of sleep on the side of the CAREgivers becomes dangerous when having to care for the other 50 animals at CARE. It was decided that special housing needed to be constructed for Zuberi and Araali to fit their needs. It would need to be connected to the house for easy access, have a sizeable indoor area, but have access to their outdoor enclosure. There was a lot to think about.

Enter the Hero. Local businessman and CARE friend, Andrew Rottner, spent hours comforting and caring for the boys since the onset of their illness. Between us, we don’t think he stood a chance of not falling in love with them from the moment he first saw them. Twenty four hours after Andrew heard of our housing issues, he and John of John Schedcik Custom Homes arrived at CARE to start planning. Zuberi and Araali’s new rehab facility would be added directly on to the house so they can still come inside when needed, it will have 19 windows all around to structure to give the young lions the valuable light they require, but it will protect them from the elements and be climate controlled with central heat and air. The construction of this amazing facility began Christmas Eve. Andrew and John did not stop with the construction through the holidays. These two gentleman donated a portion of the cost and a lot of their valuable time to the projects.
Along with John and Andrew, we can’t begin to thank all of the people that have made this amazing project happen! Several employees of North Texas Bank gave $1,000 each to help fund the building. Vendors BBC, Mike Sanderson of Sanderson Electric, Don’s A/C Service, Framers Rob and Ray Brewster spent long hours completing the building as quickly as possible. And, we cannot forget all of the people who have donates to the boys’ care since the first mention of trouble. Those donations went towards paying for the remaining half of the building. 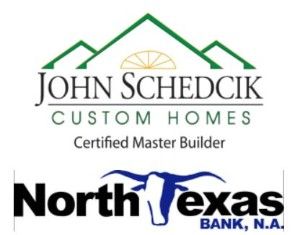 Construction has been completed and final touches are being done. The boys will not be able to stay in this environment forever. At some point they will become too big and too mature for the area and our contact. Our hope is that through all of our efforts they will be in good enough health to move to a regular enclosure to spend the rest of their lives in comfort. But, for now, this is what they need and this space will be essential to their care. Most importantly, none of it would be possible without you. This has been the most powerful outpouring of support that CARE has seen in its entire existence! Each and every person that donates their time and/or funds to CARE plays a part in the lives of the animals here. We never forget that, and neither should you. You help make this center what it is, and help provide an existence of love and special care that Araali, Zuberi, and so many others need and deserve.