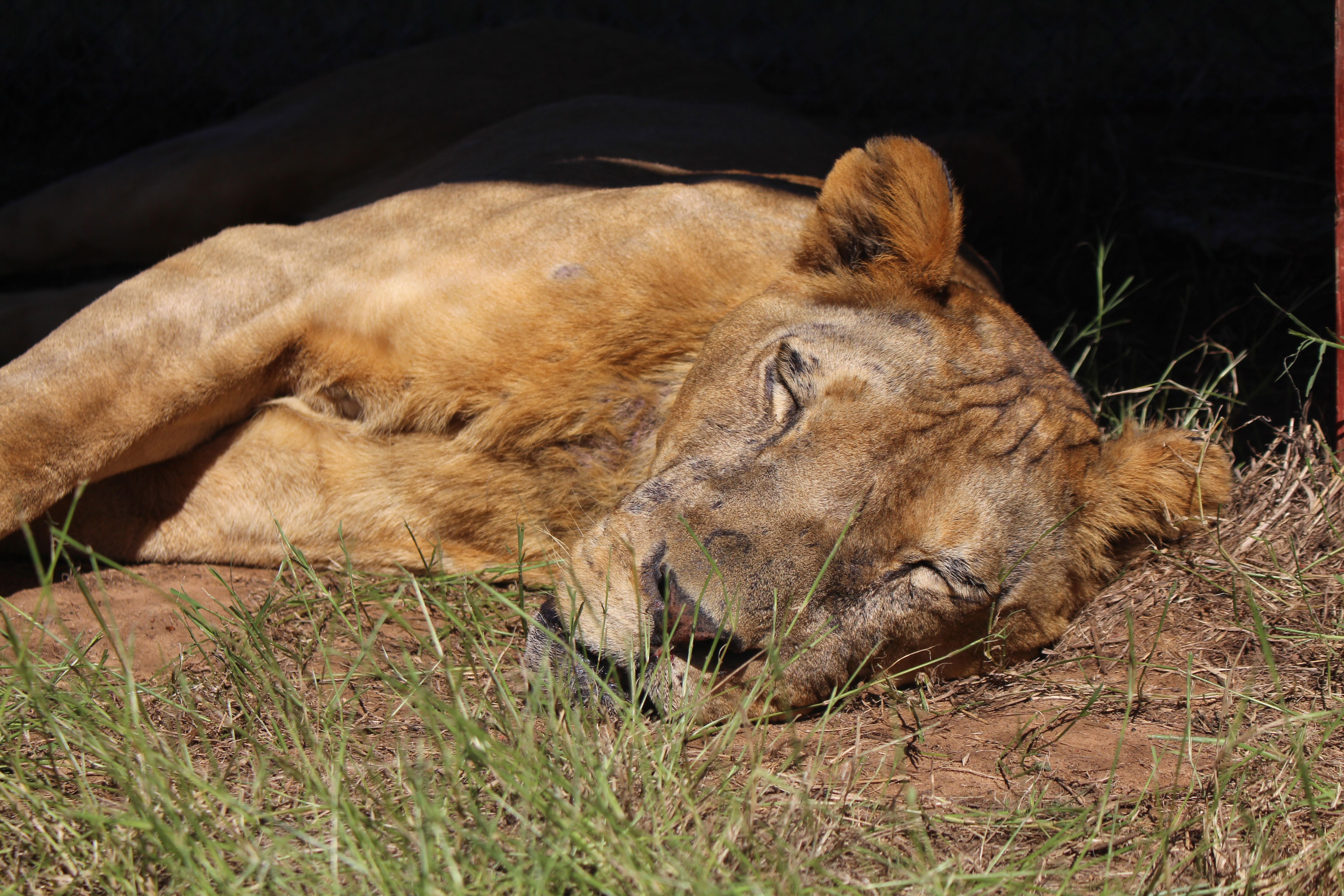 We want to officially introduce you to CARE’s new arrivals!

Early in the morning on September 27th, 2018, we started unloading five exotic cats from a huge 18 wheeler after their long journey from Florida to Texas.

The five cats lived the first part of their lives at an exotic animal facility and travelling zoo. Many of the cats were taken out on the road to malls and shopping centers for display. Over the years it became evident to the owners that they would need to close their business and say goodbye to their animals.

We are very glad that they reached out to us. We promise to do our best for them for the rest of their lives. They will enjoy stability and peace and lots and lots of love! We are already smitten with them and we can’t wait for you to meet them!

First up, Munchkin – or Munchie for short. Munchie is a 2-year-old Golden Tabby (also called Blond or Strawberry) tiger. Munchie is as sweet as he looks. He was snuffling at everyone the minute he was off of the truck and was pretty easy to get into his new home. We unloaded him into Mika, Zara, and Ezra’s big enclosure (they were put in the alleyway for the time being). Munchie made a bee-line for where Ezra was on the other side of the fence – and he did not leave him for hours. We actually had hoped that the two young boys would get along since the girls are so nasty to poor Ezra. Ideally we could keep Ezra and Munchie together and separate them from Mika and Zara. At least on Munchie’s side, it was love at first sight! Ezra is definitely interested, but a little more on the playful and pouncey side, so we will see how things progress over the next few days to make a decision on roommate status. 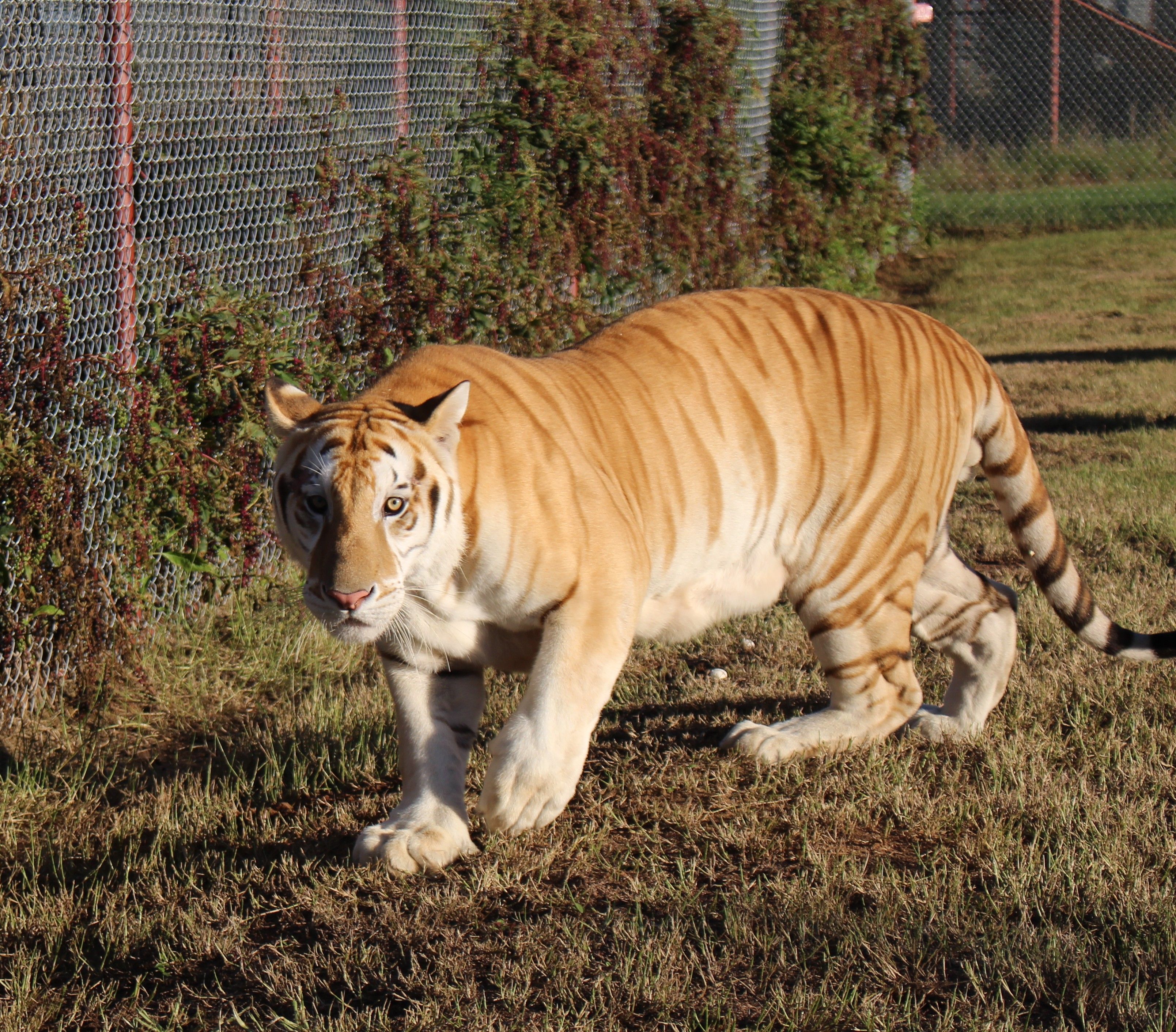 Next, Princess. Princess is beautiful and delicate 2 year old white tigress. Princess was also really friendly immediately, although a little more nervous than Munchie. Princess seemed really confident once she was in her enclosure. Only an hour after her move, she was up sitting on the top platforms taking a nap. However, when we drove the tractor around later that day to feed everyone, it seemed to set her back a bit. We are trying to make her feel as comfortable and safe as we possibly can right now. 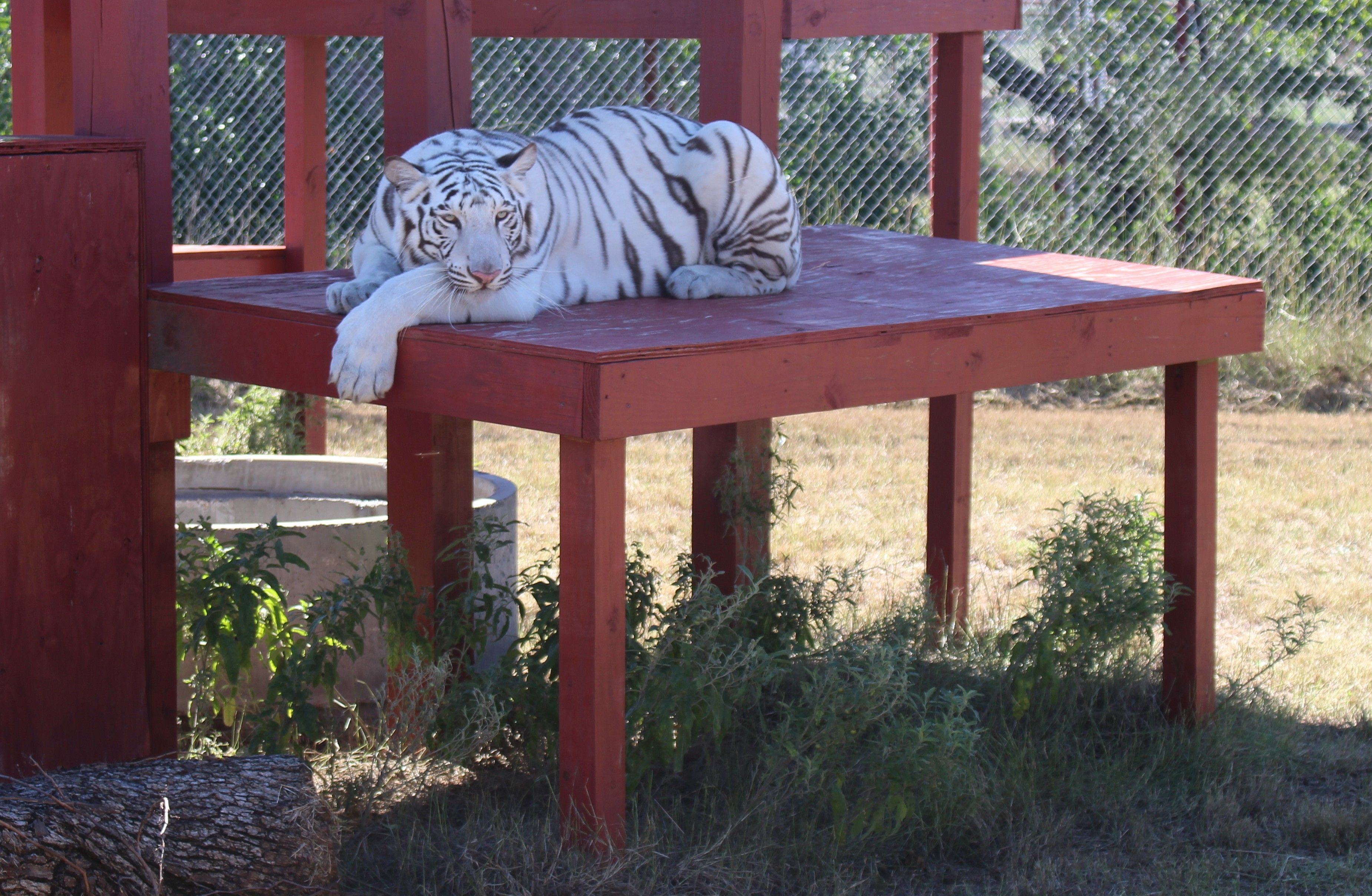 Wren is the last of the tigers and is 6 years old. She, out of all the cats, had never been in a transport cage before so it was quite a bit rougher with her than the others. She just did not want to get out of her cage. Once she did, then she really did not want to get out of the entryway she was in. Then she moved to a corner and really did not want to move from there. For all of these cats, this transition is stressful. But for some it can be far worse. Thankfully, from the minute she arrived she formed a connection with Derek and Heidi’s son Dakota. He stayed with her the whole time she was being moved and she was definitely looking to him for security and comfort. 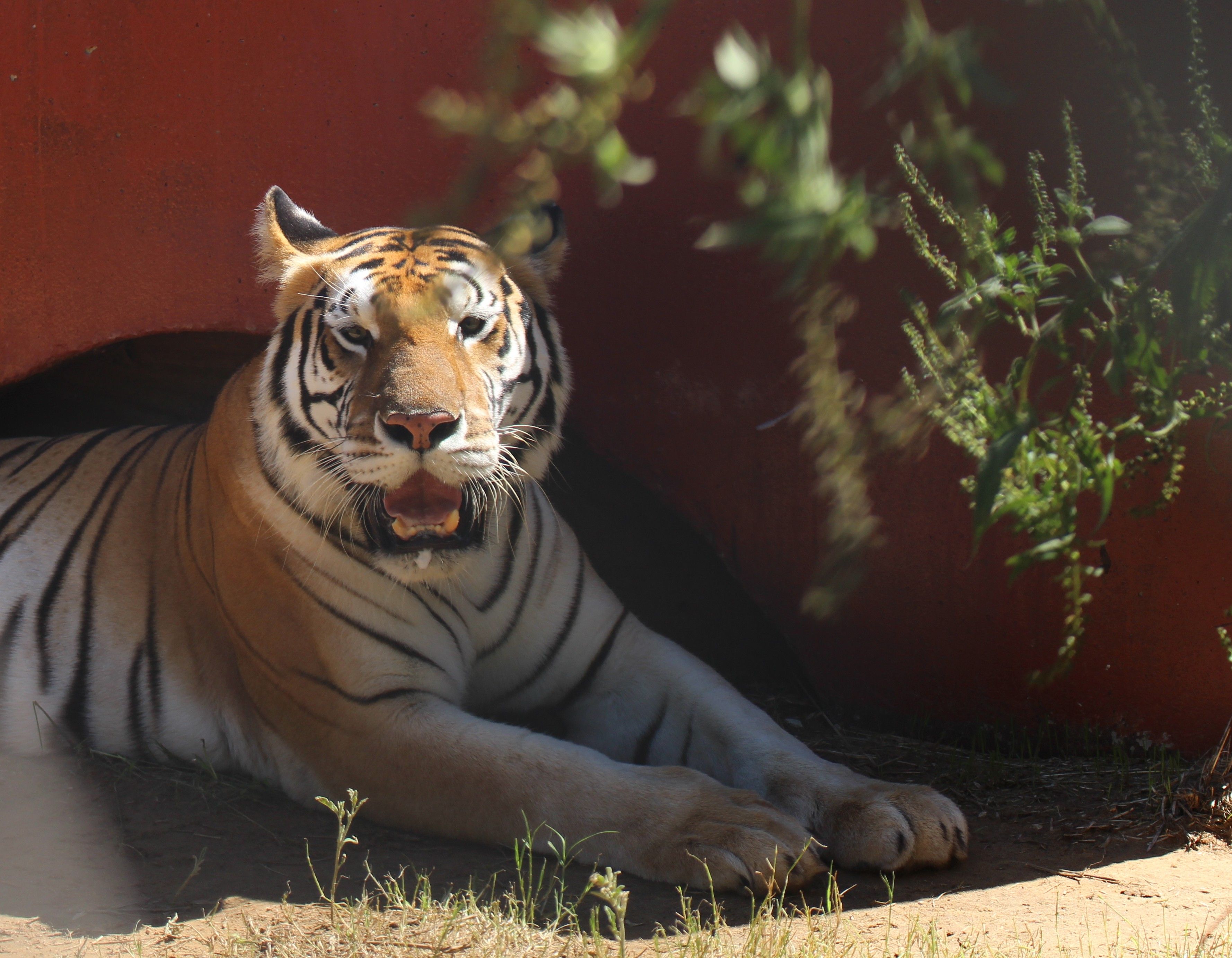 Malika the Siberian Lynx is just 2 year old, and the most long-legged creature in the world! She is beautiful and we can’t wait to see her puff up in the winter. She seems calm, sweet, and playful. She immediate was exploring her enclosure (right next door to Bobbie) as soon as she was put in. She found several of her toys quickly and gave them a few bats before crawling into one of the houses and taking a well-deserved nap! 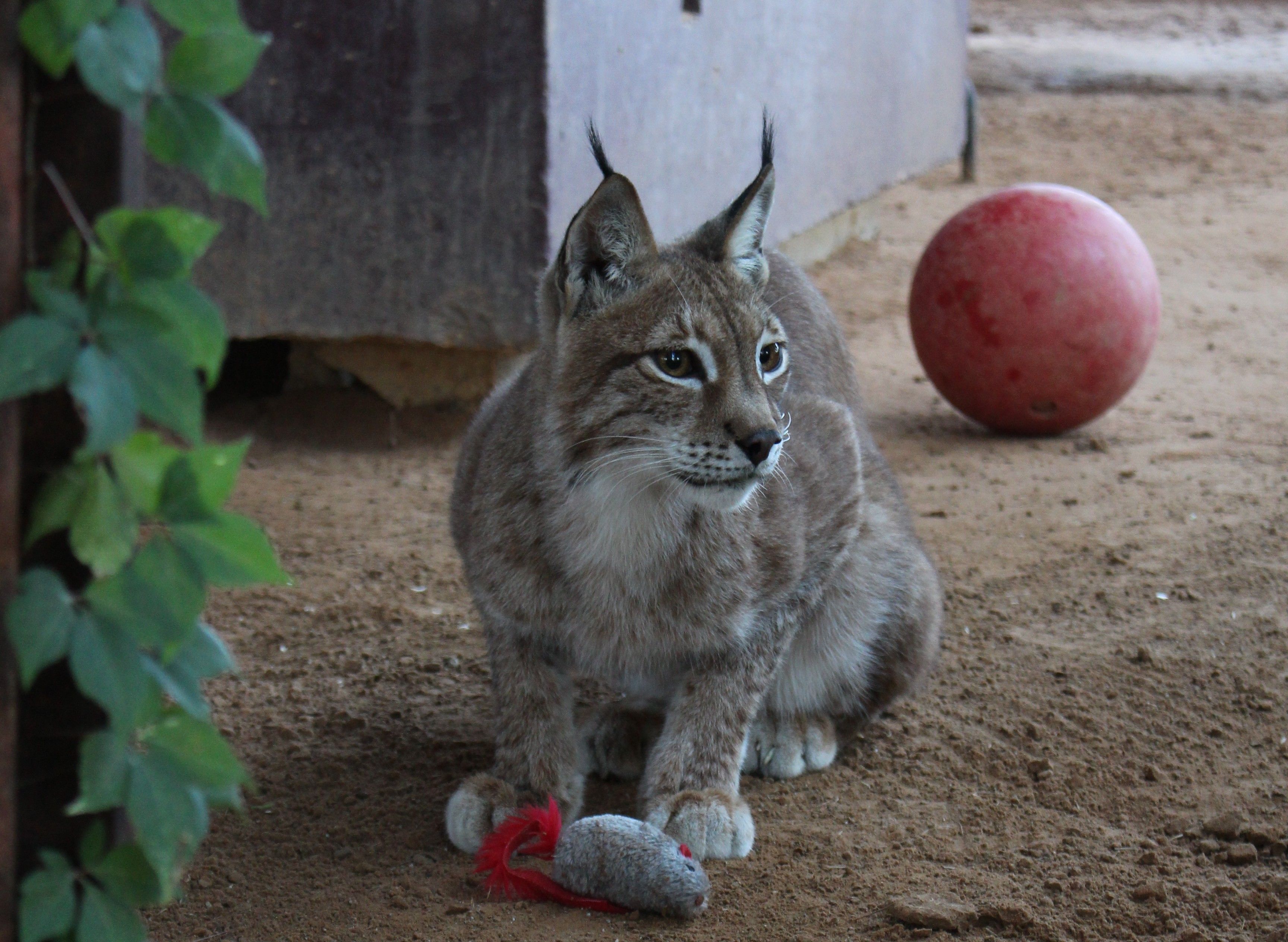 Last, we have Kiara the 14 year old lioness. As you may know, Kiara was due to arrive with a male lion. However, before her previous owners wanted to transport them to us, they wanted to have the male treated for a possibly tumor on his rear-end. They surgery went well but he was slow to wake up after the surgery. Unfortunately, he passed away during the night, most likely due to his advanced age. We were very sad to hear that Kiara would now be alone, but we do know that awful things happen sometimes even when you are trying your best. When Kiara was being unloaded she did not seem very happy, we also noticed that she was the most fragile of the group. We asked how she has been since losing her mate and were told that she had been in a very bad mood – which we could understand. She pretty easily went into her enclosure and went straight for her toys. We ended up putting her in Tabula’s old enclosure and she even has the company of Craig (Tabula’s old ball). If Craig helped one old lioness during her life, maybe it can comfort another. 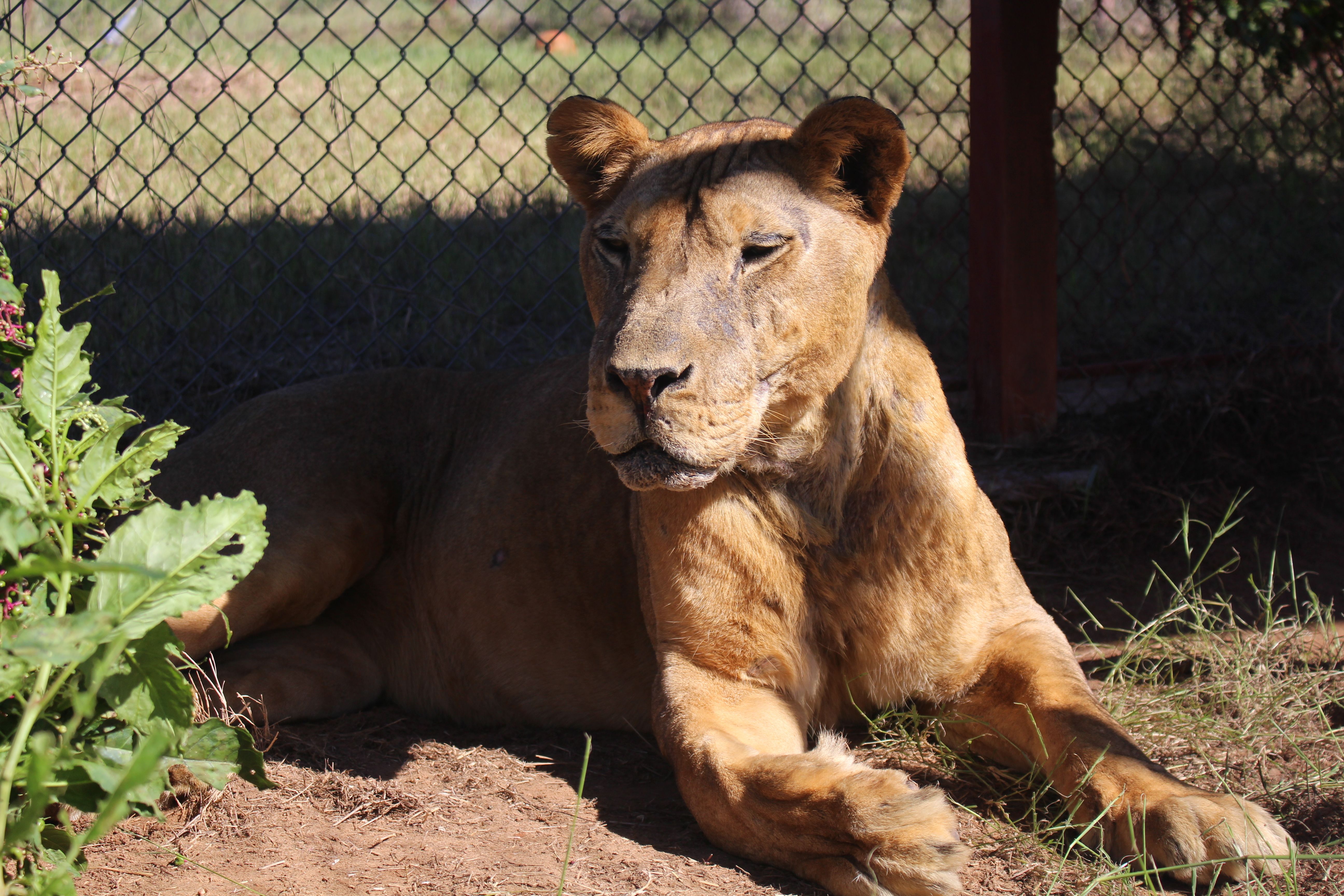 What we found out is that Kiara seems to be the most comfortable and confident of the group and does not seem cranky at all – in fact she is turning out to have a lovely personality! Kiara does require some extra TLC. She has a skin condition that needs to be addressed and she needs some extensive dental care that we will need a specialist for. For now she is getting stronger every day.  She is enjoying the company of the CARE staff and interns and volunteer Rachel, who hand feeds here several times a day.

We can’t wait to learn more about these special cats in the coming days and share them with you.