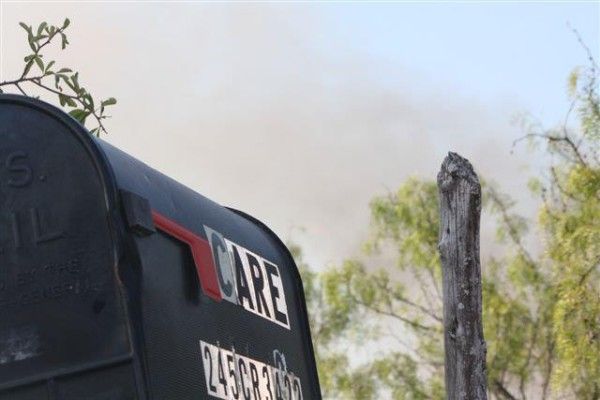 Heidi Krahn was concerned about the dwindling water supply at her big-cat sanctuary in Bridgeport when son Dakota, 13, turned her stress-o-meter to maximum."He screamed into the house shouting, 'Mom! Fire!'" Krahn said.Dakota said he was cleaning the pool Thursday afternoon when a huge, dark cloud suddenly blocked the sun."As soon as she saw the cloud she called 911," he said of his mother.The sky behind the Center for Animal Research and Education in Bridgeport was black with smoke from a grass fire.

The fire devoured 100 acres of bone-dry grass and scrubby mesquite groves, threatened four structures and took almost eight hours to put out, Bridgeport Fire Chief Terry Long said. The call on County Road 3422 came in about 5 p.m. Thursday, Long said. "I had a crew stay with it all night long," Long said. "We're still on fire watch there, going out and checking it every hour." Long said the sanctuary was never in danger because the fire started across the road and traveled away from it, pushed by a north-northeast wind. He said the fire started at the roadside, but he would not speculate on its source. "It's under investigation," he said.The fire did however, jump County Road 3424 north of the sanctuary, Long said. It also drew about 40 firefighters from Bridgeport, Lake Bridgeport, Chico, Paradise, Cottondale, Alvord and Decatur. They used 12 brush trucks and five tankers, Long said.The sanctuary is home to 35 tigers, seven cougars, six leopards and three lions. The cats kept their cool during the fire, Krahn said. "They weren't necessarily frightened," she said. "Mostly they were just really curious. The smoke was drifting next to the enclosures, not over them. We were very lucky that the winds were with us yesterday." Long said the weather is hammering fire departments hard. "Yesterday was 102 degrees and 20 percent humidity," he said. The heat is taking a toll on the sanctuary, too. For instance, some of the cats require air conditioning, which has run the electricity bill to $1,000 a month, Krahn said. "We have a lot of problems out here," she said. "The extraordinary heat is making it harder on animals that have trouble anyway." The biggest problem is that water trickling from one well into a holding tank is not enough, Krahn said. "We have a well company trying to hook up a new system, tying some old wells together to maybe get us through the summer," she said. Krahn said she knows that a lot of nonprofits are struggling because donations are the first thing cut out of family budgets when the economy sours.That's why for her, volunteers like the firefighters who responded to her call for help are angels."They're amazing, lifesaving," she said. "It honestly brings tears to my eyes that they're volunteers like the people who work here. They get nothing out of this but the feeling of doing something right like we do with the cats. They risk their lives to save people, and this time they risked their lives to save our cats." 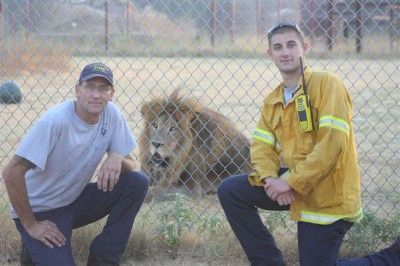 Decatur Fire Fighters get a big thanks from Sampson after the fire was under control.... Thank you all 8 fire departments the extinguished the dangerous grass fire that threatened CARE.