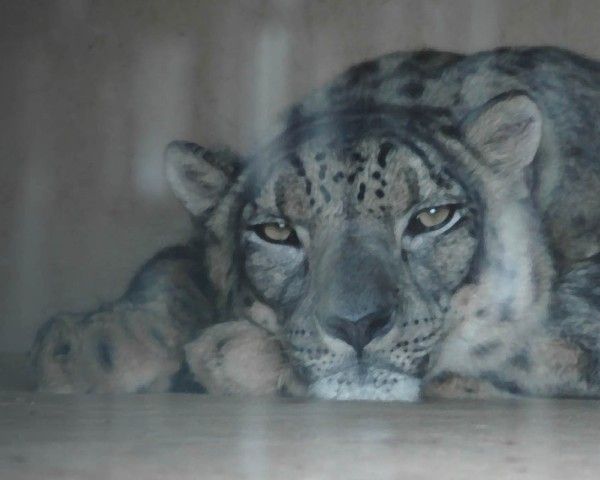 How to Train Your.....Snow Leopard?

If you have been following any of our social media accounts, you probably know that Arctic the snow leopard has been under the weather again. First of all, he is doing a lot better, thanks for asking! We just wanted to share his heart-warming story with all of you.

Back in the summer of 2012 Mr. A was so sick that there was a strong possibility that he would not survive. We took him on a road trip to visit our friends at Texas A & M University and discovered that he had a strain of antibiotic resistant bacteria that had attacked his respiratory system.

We were so fortunate that the doctors found a treatment that would work for our dear Arctic. He had to have round-the-clock care and very expensive medications to keep him alive. During this critical time, in which he lived in a transport cage in our Executive Director's bathroom, he also needed constant company and comfort from his CAREtakers. Because, at some point, people have to sleep, Arctic would eventually have to be left alone for a little while. Whenever this happened he would cry his head off for someone to come back and keep him company. When Arctic does not feel well, he does not like to be alone! The sad part is, a lonely and depressed animal can go downhill very fast!

In order to somehow keep him entertained and engaged, without having to have someone with him 24/7, we came up with an ingenious idea......TV! The idea came from our lion cub Noel, who was born on Christmas day, 2011. When she was a small cub, she loved watching cartoons. Dora the Explorer was her favorite. They not only entertained her, but also seemed to soothe her. So, we tried applying this to our very needy snow leopard. It turned out that it worked like a charm. We also discovered that out of all the cartoons and movies that we tried, How to Train your Dragon was his favorite. We guessed that it was because the dragon in the movie has a bit of a snow leopard-y face and certainly has the big, slightly slanted eyes that Arctic possesses.

Arctic recovered well, and turned into a very happy cat. He plumped up, his coat became thick and luxurious again, and he started chuffing, a lot! Yes, snow leopard do chuff just like tigers do. Most of the volunteers at CARE had never known this until Arctic started snuffling at every friend that came to see him. You could tell that he felt so much better! He even successfully killed a sofa that we put into his recovery room in the vet center.

A couple of weeks ago, Arctic started showing signs of an illness. Except this time it wasn't a respiratory infection. It turned out that the bacteria had moved into his kidneys and he was not doing well at all. It was really scary for a few days and he was moved back into his transport cage in the bathroom. Again, cartoons were played to help comfort Arctic and keep him company. This time though, the TV is a little larger (a 50" flat screen instead of a mere 34" TV) because of his failing eyesight. How to Train Your Dragon is not only still his favorite, but pretty much the ONLY thing he will watch.

He has been improving every day. Lately, he has been moving out to his regular enclosure during the day (around noon when he wakes up) and then is brought back in when it starts getting dark so he can get some love, his meds, and of course watch his movie. 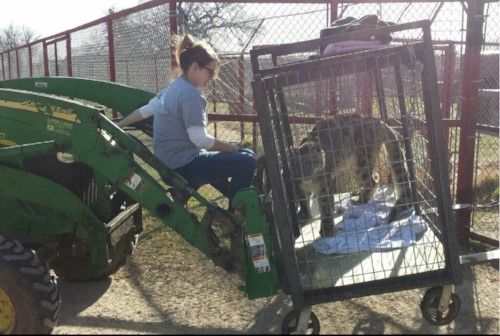 He still will cry a little bit when everyone leaves the room, but as long as he has his dragon friend to keep him company, things are o.k. This type of care for our sick and elderly animals is the heart and soul of CARE. It is one of the things that sets us apart and what we are most proud of. Chuff Chuff!