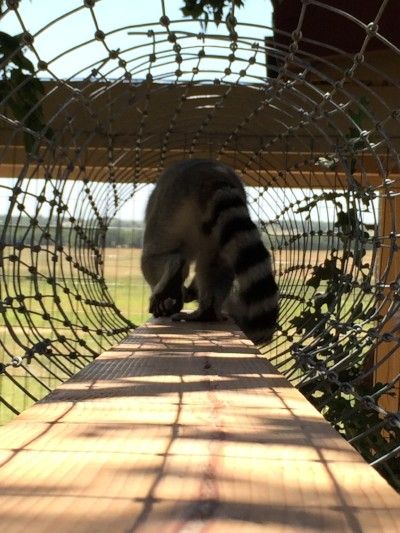 Since the time we took in our troop of lemurs, they have had created a lot of drama!

Ring tail lemurs are female dominant, and our girls have had a hard time figuring out who the boss is. A while back, Ruth decided that she was top dog and attacked the alpha female at the time, Rita. Rita was severely injured, and we feared for her life. So she was moved to a smaller adjacent enclosure along with the adult male, Mort, to keep her company. We hoped we would be able to reintroduce them, but we learned that it would not be possible. Rita had been rejected from the troop and they would surely kill her if she went back. To make matters worse, a young female (Miss Stewart) started to dominanate the other females in the troop. Ruth would have none of that, so Miss Stewart was attacked and ousted as well.

Now we had three lemurs living in an enclosure that was never supposed to be permanent even for one. We knew we needed to give them more space, so we started expanding their enclosure. We also wanted to make space for Bindi, our coati, so we could move her out of the vet center (really a place for sick and injured animals) and into a more natural environment.

With the arrival of the cubs, sick animals, interns leaving for the fall, and work on the Welcome Center, the progress on the lemur house has been slow. But, we finally finished it this past weekend and the three outcasts got to inspect our work! Check out the video below to see their first time in their new space!