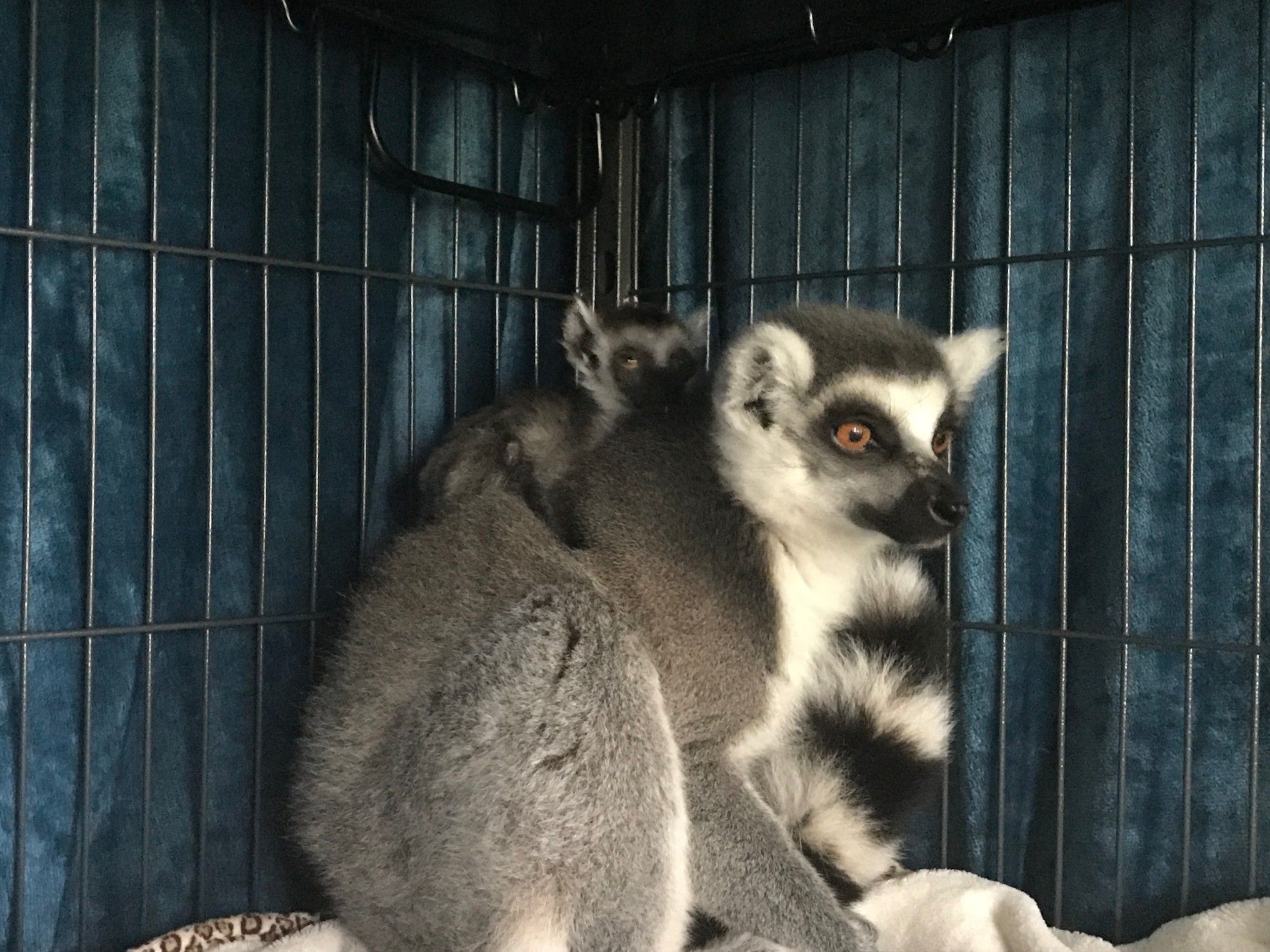 If you have been following along, you know that on July 17th, we were brought a two month old baby lemur. She had not eaten in two days, and we made the decision to see if we could save her...knowing the odds were against her. When Momo arrived, she weighed 97 grams, one-third the weight of a healthy two month old. It has been a constant battle to get her to eat, but after 2 weeks, she is up to 150 grams! While the first few days were spent just seeing if she would live, we knew we would have to introduced her to other lemurs soon if she would have any chance of a normal life. Lemurs are incredibly social animals, being hand-raised leads to severe psychological issues and aggression and living a life alone is a horrible fate for these primates.

So, about a week after she got here, we started walking her down to see our two troops of adult lemurs. Hearing, seeing, and smelling each other would be the first step to an introduction. Every day, she would go on several small visits. We chose the smaller troop of three, with Mort, Miss Stewart, and our gentlest female, Rita, to be the best family group for her.

After two long weeks, we were all set for a full introduction in a secure environment so we brought Rita up to the sun-room (which has served as a recovery room for her before) to meet Momo. It was a very tense and scary situation - a bite from Rita could end Momo's life in a split second. But, Rita proved to be the gentle, patient, loving lemur that we knew she was! The introduction went far better than we every expected.

Now that the two are together, we are giving them the space they need to bond. We also need Momo to get strong enough to cling on to Rita while she jumps around. During this time, Momo will still be fed her formula to make sure that she continues to grow. But, just in the short time she has been around Rita, she is already trying to eat on her own a bit!

We will keep an eye on things for the next few days - then start the introduction process again with Mort and Miss Stewart. The scary stuff is not over, but what has occurred with Momo and Rita is not only a good place to start, it is more than we could have hoped for!

We've just posted a video of Momo's introduction to Miss Stewart and Mort yesterday - including info about next steps - on our YouTube at CARE Rescue Texas.
We wanted to take a second though to really explain how amazing this all is. Just the fact that Momo survived her first few days with us, given the shape she was in, is a miracle. That she continues to thrive is spectacular.

When Momo first arrived, we reached out to several facilities that specialize in lemurs to get some advice on what we knew to be an uphill battle. Maybe there were others who had attempted the same thing - we could learn from their successes and their failures. What we ran into, no matter who we talked to, was the same message. You can try, but don't get your hopes up - every story, piece of data, and husbandry handbook said that this cannot be done successfully. However, a few people were willing to brainstorm ideas despite their grim prognosis - and we deeply appreciate their ideas and encouragement!

We thought the best - the absolute best - we could hope for was for Momo to be accepted into the group enough that she would have company and that they wouldn't kill her. To have Rita literally take her as her own is beyond our expectations. Rarely - if ever - does a female adopt a strange, unrelated baby and take care of it the way Rita has. The fact that Mort and Miss Stewart not only accept, but seem to want to look after her too, yet allow Rita her motherhood, is icing on the cake.

We want to make it clear that Momo is the exception, not the rule. We still have to turn down multiple requests a month to take in adult lemurs who were pets - and now the owners can't or won't care for them anymore. Nine times out of 10, the lemurs are alone and aggressive. It breaks our heart every time we have to say no, but we simply do not have the resources right now to accommodate situations like these. We do the best we can, with what we have, when we can. We wish we could help them all, but right now we are so happy we have been able to help just one!