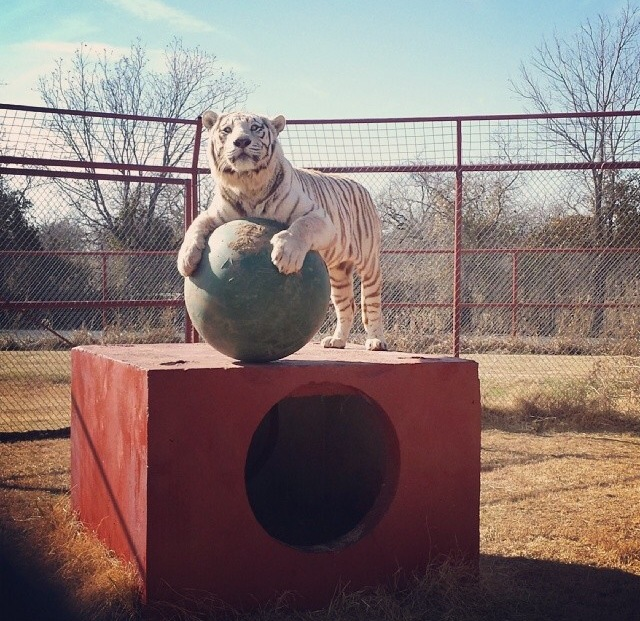 Solano Gets a New Enclosure

Big cats in captivity are very interesting creatures who can develop very specific, sometimes quirky, tastes and habits over time. They can be rather particular about little things such as the placement of their favorite toys, a position in which to lay and relax, their favorite food, and how they like the weather to be. Due to this, they can become very stressed if significant changes are introduced into their world and it can become a major issue for us CAREkeepers to deal with if not handled properly. Things such as adding new structures into enclosures, giving a cat a new neighbor, and moving a cat into a new enclosure are examples of significant changes which can cause worrisome and potentially dangerous problems.

Solano, one of CARE's big white tigers, shared an enclosure with three of CARE's other white tigers, Bonnie, Clyde, & Levi, for many years. Over time, things between the four cats became a little tense. Disagreements and heated arguments started to become more commonplace and the root of the problem could be traced back to Solano and his disregard for the others' personal space. The dynamic of the enclosure had shifted, the cats were starting to get unhappy with each other and they were on edge, which is a recipe for disaster. We realized something needed to be done to preserve their well-being and that a separation was likely the only solution. This meant the dreaded c-word - CHANGE.

Solano is, to put it gently, a bit 'thick-headed' and we had significant worries about how he would cope with being away from the three others he had spent most of his life with. We came up with a solution by expanding the four white tigers' enclosure lock-down area to serve as Solano's living space. This way, he was close to the others and he could interact with them, but he was physically separated from them and they were all safe and more comfortable. It wasn't perfect, but given the circumstances and the limited compound space available, we felt it was the best solution. The four cats lived this way for a few years and things were pretty harmonious between them. Over time, as nature would dictate, CARE lost a few of its beautiful animals due to age-related illnesses, and the remaining cats were shuffled around the compound to optimize their living areas and make the best use of the facility space. When all was done, there was an unfilled enclosure next to Kannapalli, CARE's biggest white tiger.

On one hand, we had a perfectly good, open enclosure which could adequately house a lion or a tiger. It was much bigger than Solano's current living space and it had cool things like elevated platforms and lots of grass. On the other hand, it was completely separate from his three life-time companions. Plus, Solano is a logistically TERRIBLE cat to move (he doesn't care for that process at all which makes things difficult and dangerous), there was absolutely NO guarantee he would get along with Kannapalli as a neighbor, and the stress of leaving his familiar surroundings could be too much for his lil' brain to handle. We always do things in the best interest of the cats whenever we make decisions on their behalf, and we just wanted to do what was best for the big guy. We thought about it for a long time, and we decided to take a chance.

Getting Solano to go into a transport cage was the first challenge. He is a big and powerful boy tiger, and he is not a fan of transport cages. Some cats love transport cages because it means they get to go 'bye-bye' and embark upon fantastical adventures. However, some cats hate transport cages with a passion and don't want anything to do with them. Solano, sadly, is a member of the latter group. After securing the transport cage firmly in place and opening the doors to let him in, it was now a matter of coaxing the loveable lug into the space. We were prepared for this process to literally take days in order to achieve success. Surprisingly enough, he went in after only a few minutes with the help of the promise of chicken leg snacks. Once the gate was shut, Solano immediately started to get stressed in the confined square, increasing the danger factor. We couldn't let him back into the enclosure or we'd almost certainly NEVER get him to lock back up, so we had to MOVE - it was now or never. We rolled him over to the new enclosure as fast as we could and once everything was in place, we let him out into his new big new space. Solano, blinking and curious, began to explore.

We were worried when Kannapalli, CARE's biggest and strongest tiger (and now Solano's new neighbor), crouched down behind a rock in his enclosure and stared at Solano with intense eyes and aggressive body language. "Another tiger, a MALE no less! We MUST now engage in combat!" is what must have been going on in Kannapalli's mind based on the signals he was showing. With big cats being introduced for the first time, this is to be expected, and the key is to try and distract them long enough to hopefully manage their initial freak-out. Also, keep in mind that there were two layers of perimeter fence separating the two cats, but it doesn't mean they couldn't possibly hurt themselves in an aggressive outburst. Controlling the situation to the best of our ability was key. We tried to get Kannapalli's attention in the hopes of dissipating his aggression, but he wasn't listening to us- he was going to give Solano a piece of his mind as soon as Solano got close enough! 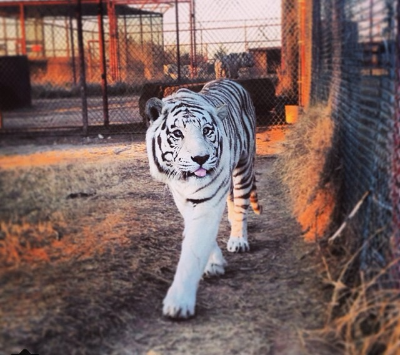 Solano was walking around the perimeter of his new enclosure, sniffing things, chuffing, and talking to his CAREkeepers. He seemed genuinely interested in his new enclosure, and he was absolutely oblivious to the hidden Kannapalli! As Solano rounded the corner and made his way towards the perimeter, Kannapalli leapt towards the fence and gave his biggest, scariest, bellowing round of roars he could muster. It was a powerful sound. Once Kannapalli finished his explosion he stood there, snorting and staring. Solano, absolutely unfazed, made a 'mawww' sound and snuffled at his new friend. This left Kannapalli very confused and he looked at us as if to say, "Is this guy alright?". Solano, the loveable lunkhead, took all of the wind out of Kannapalli's sails. Kannapalli at that point just seemed to shrug his shoulders, lay down, and watch Solano now out of curiosity instead of anger. This was good! This was progress.

Since then, there have not been any significant issues between the two guys, and they're getting along wonderfully as neighbors now. Solano has really taken to his new surroundings without any stress. We are so proud of him for being such a big boy. We were worried that he would miss his old friends too much in this move, but he has made himself a new neighbor and friend in Kannapalli instead!