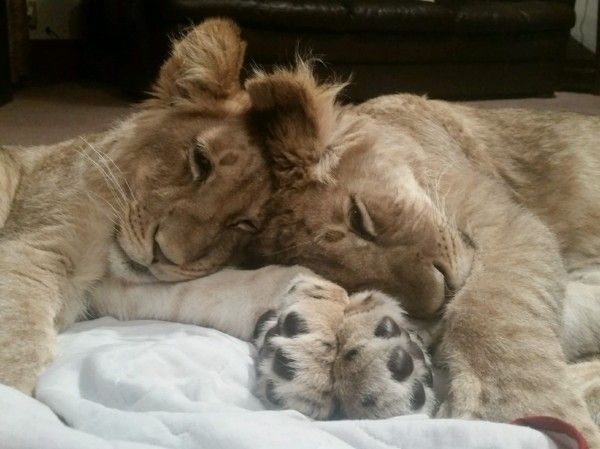 The Fight for Araali and Zuberi

Some of you may know both Araali and Zuberi have been experiencing some difficulty lately. We wanted to get as much information about their physical condition before explaining it to you. After consulting with specialists we now have a diagnosis and a game plan.

The issue first presented itself when Araali began to limp on his back right leg about a month ago. He increasingly became unsteady, stiff, and weak. After a quick examination by Dr. William McGee, or as we fondly call him, “Dr. Bill” an appointment for x-rays was scheduled. 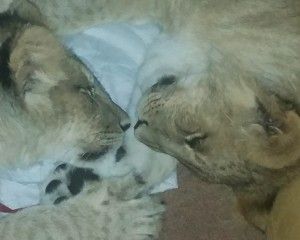 We can’t begin to explain to you how difficult it is to load an 80 pound lion into the car in a stress free manner when they have never been in one before. For his safety we thought it was best to load him into a large kennel from inside the house where he felt most comfortable. Zuberi would need to come along due to the boys’ separation anxiety. Everything was going as planned when Zuberi was startled by a toy. He ran into the wall and fell to the ground. The accident was very minor and the impact with the wall should not have caused any injury. Lions, even cubs, are pretty darn tough. But, to our horror, he was immediately unable to walk…within minutes we found that he was unable to use either his front or back left legs.

The nightmare began. The preliminary X-rays on Zuberi showed nothing and he was placed on anti-inflammatory medications hoping the swelling would go down and he would return to his old self. Araali’s x-rays were another story. There was a marked bridging on his spine and the cause is unknown. Could be genetics, and old injury, anything. Advanced diagnostics would need to be scheduled for Araali as soon as Zuberi was back on his feet.

Sadly, Zuberi showed no improvement over the following two days. An emergency call was made to Texas A & M University’s Veterinary Medical Hospital for a complete work up. The boys were now inseparable. Araali knew his brother was in trouble. He never left his side as we began our long journey began.

The A & M exotic animal team was called together and was there to greet the boys when we arrived. The staff was wonderful allowing, the boys to stay together until Zuberi was sedated for an MRI, blood work, advanced x-rays, and an array of other tests performed by this top notch team. 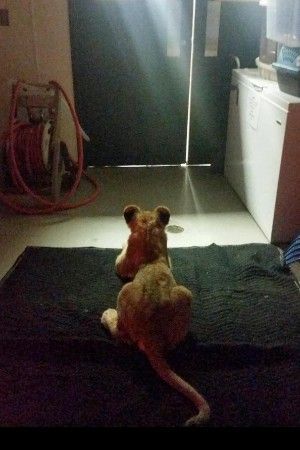 Hours later the news was delivered. The neurologist diagnosed Zuberi with Cervical Spondylomyelopathy, commonly known as Wobblers syndrome. The syndrome is caused by a narrowing or malformation of the vertebrae in the neck which causes pressure on the spinal cord. The most common animals that are affected are horses and dogs, especially breeds that grow very fast and become very large (just like lions). The cause of Wobblers Syndrome is unknown, although a link to fast growth and genetics is suspected. Symptoms usually appear first in the rear legs as a mild lack of coordination in gait (ataxia) and can escalate to involvement of the front legs as well. Many affected animals move like they are drunk and uncoordinated. It has now become apparent both Zuberi and Araali were dealing with the same issue.

When we received this news, it was like getting hit with a ton of bricks. The prognosis is not fantastic. The best option is surgery, but only for adult animals after they have stopped growing. What the doctors told us was discouraging and numbing and even euthanizing was suggested at one point. But this is CARE, and we do not give up without a fight….ever!

We never gave up on Sampson. For years it was suspected that he had a Vitamin A deficiency as a cub, which causes him to wobble when he walks. Knowing what we know now, he could very well have the same issues the boys have. The good news is that Sampson survived as a cub and is now a senior citizen at 15 years old! There is hope.

The first steps are adding more calcium, fatty acids, and Vitamin D to their diet in addition to lots of sunshine for additional Vitamin D absorption. We were also told that it is crucial for their movement to be restricted as much as possible. No jumping, climbing, or rough-housing. You try telling that to 6 month old male lion cubs! But, we are doing everything we can. They are staying in Derek and Heidi’s house where they even take turns sleeping with the boys at night. They are observed 24/7, with many daylight breaks in a newly constructed fenced area in the yard where they cannot get into any trouble. Dahlia is watching them closely too, making sure they are okay.

We have regular visits from Dr. Bill and Dr. Tate, our local chiropractor, who is helping us understand how to stretch and massage they boys’ necks. Assisi Animal Health has released a new technology called Targeted Pulse Electromagnetic Field Therapy (tPEMF). It is a non-invasive, non-pharmacological treatment of pain and swelling used on Wobbler’s Syndrome in domestic animals. They have graciously donated one of the units for the boys. Our volunteers spend hours with the boys making sure that they are carefully watched and given lots of love. 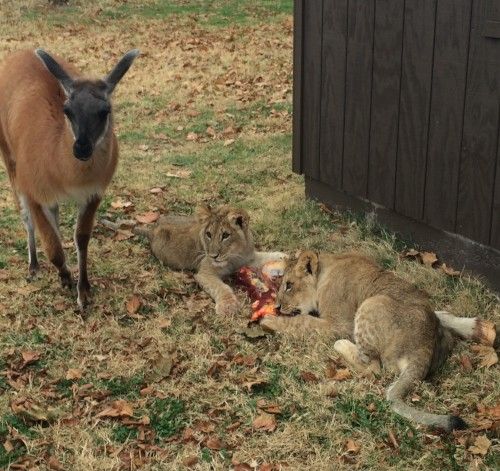 CAREgivers and medical attention are only half of the battle though. Hundreds of donors have come forward to make sure the boys will only receive the best care there is. We are presently breaking ground on Zuberi and Araali’s new indoor/outdoor environment (more info coming soon). We will continue to research and do anything and everything we can to find a solution, as long as they have quality of life, we will not give up. Already we have seen improvement in Zuberi, walking more each day.

We will not be able to fight this battle alone. We cannot thank you enough for rushing to the boys’ aid already. When we say that the animals at CARE would not be here without you, we REALLY mean it. This is going to be an exhausting and expensive endeavor and without your help, we just can’t do it. So, thank you. Thank you from the boys, from us, and from every single big cat, coati, lemur, and llama here. If there is any possible way, WE together will win this battle and the boys will live to a happy and healthy old age.