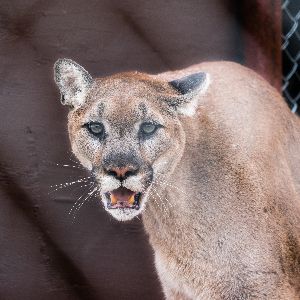 Apollo was easily one of the most beloved animals of anyone who worked with him.  He was a beautiful, sassy soul who would claw his way into your heart with every hiss and grumpy interaction.  He made everyone work hard to gain his trust but once you had it, you would get to see his silly playful side.  His sudden loss will continue to be hard but watching him spend his last year happily in retirement with his companion Lakai makes my heart happy. He will forever be missed by those hearts he touched.

In January 2010, Apollo was found starving and alone on a back road in British Columbia. He was only 3 months old. He was taken to a wildlife shelter in Canada, and later in the year, transferred to the Dallas Zoo where he was introduced to another male cougar cub, Lakai. The two have been inseparable ever since.

After 7 years living at the Dallas Zoo, CARE was approached to take the pair in when the zoo made the decision to permanently close the oldest enclosures in their park - where the two mountain lions were living. CARE was happy to provide the males a permanent retirement home and they moved in January 2018.

Apollo is the bigger of the two cougars but is the more tentative of the two. He is very bonded to Lakai, and always needs to know where he is but is also a bit submissive to the smaller male. The two have a very close relationship though and are often seen curled up together. Apollo is also turning out to be quite vocal - calling to Lakai and talking to CARE staff and volunteers.