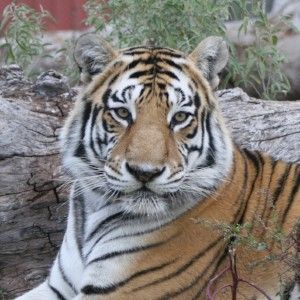 ***** I have kept this story to myself for many years. When people hear the story, many of them will surely say, “She is insane” or “Who would ever put an innocent life in such jeopardy?”. I am well aware of these perceptions, and I too would be thinking and saying the same things if I was to hear this tale, which borders on the unbelievable. I wrote much of this story over 15 years ago, CARE did not exist as it does today, and for those past 15 years I was reluctant to share it with people. I feared that others would be inspired to somehow attempt to share with a tiger the same relationship that I am going to tell you about. Beautiful as this story may be, I never wanted to let it overshadow the reality that big cats are tremendously dangerous and are not meant to be pets. I have spent a lifetime trying to keep big cats from suffering in the hands of those who are ignorant, exploitative, or abusive, and as such, I felt as if the potentially dangerous perception of this story outweighed the beauty I had wished to share.

My dearest tiger, Calamity, and I took our final journey together today, November 9, 2012. Calamity and I have shared so much in these past 19 years- good and bad. She has been my companion and my savior. In writing her memorial I knew I could not compose it properly without including the greatest story in my 23 year odyssey with the magnificent big cats. I simply have to tell the story which made Calamity a supremely beautiful and special being.

Taking place only a handful of times within an era, the stars will align perfectly to make for the most unusual and rare occurrences in the world of friendships. A precious relationship is made from a union of the most unlikely creatures, where the ties of shared motherhood prevail over all the institutions of logic and nature. The following is an unbelievable and incredible series of events that created a lifelong bond.

My Destiny
I was 7 months pregnant with my first long-awaited child, Destiny, and I was also deeply depressed. I thought this little life growing inside of me was the answer to all of my prayers. Someone to love with all the love I had to give. Someone to fix my life that was, at the time, absolutely falling apart. During those days which should have been joyous, I was tormented by an abusive, unfaithful, and often absent husband who seemed to make it his duty to drain me of all the happiness I felt in life. Without going deep into specifics, I can only ask that you, the reader, please believe and understand that my pain was very real. I had been, over the course of numerous years, systematically stripped of my humanity, and due to my crippling anguish, the pregnancy had not gone so well. I often teetered with the reality that I would lose my beautiful child, which only served to make matters infinitely worse. I was a lost and confused soul. The depression was overwhelming.

The Event
Recovering from a complication, I had just been released from the hospital. My pregnancy was fragile, and my Destiny weak, hanging on to life by a thread when Calamity gave birth. As with most first time tiger mothers, Calamity had no idea what to do with these strange, moving creatures which had just come out of her and caused her an incredible amount of pain. There were four beautiful white tiger babies born from an orange mother on that cold, rainy day. This was quite the miracle in and of itself.

The Dilemma
I had been around many tigers giving birth in the past. Through the years I had become quite a good tiger mid-wife. I thought I was prepared for anything, even the possibility of being bitten or killed. When I arrived, her four babies were already cleaned and hungry. Past cleaning them, Calamity wanted nothing to do with the screaming monsters. She lay outside the house where the babies squirmed. She looked at me as if to say, “Come and fix these horrible noisy toys. They are awful!” and we all know what Calamity does to her toys. I also knew if I did not get her to nurse them with her valuable colostrum (first milk), they would most likely die. At the time, me entering an enclosure to help big cat mothers give birth was common, but this was different. I had my own child to consider. I stood alone, watching her as the cold rain began tapping me on my tear stained cheeks. I had to make a decision soon. I was risking both my baby’s and the four tiger babies’ lives in the cold wind. I slowly opened the large metal gate and entered the den with Calamity.

The Chance
I shut my eyes tight with a final prayer of wisdom. I opened the gate and walked slowly towards the mother and her babies. The 400 pound Calamity immediately ran to the house where the two pound babies cried and she stepped around them lightly, keeping an eye on me the whole time. I was relieved she did not show me her 3 inch long and razor sharp teeth. I knew she was terrified. Did she want my help or did she want me to leave her and the babies alone? I walked closer and snuffled (a tiger purr) to her as I had done many times before. I waited for her reply. The silence seemed to last for hours before she snuffled back. Endorphins rushed through my cold, shaking body. I passed Calamity’s first test.

The Triumph
I moved very slowly and deliberately, and in the following hours I was able to get Calamity to calmly lie down in her house and nurse all of the beautifully striped babies. What a wonderful triumph! I sat outside her house, a relieved yet very exhausted pregnant woman. I had to rest. As I left the enclosure, Calamity ran to the gate with me. Startled, I slipped out of the gate quickly. I knew all of the babies had eaten. They would be okay for another several hours. Hopefully she would go back in and feed them soon.

The Storm
Many hours passed. Calamity did nothing but whine for me to return and help her with her children. The babies cried out for their mother’s life-giving milk. I finally made the cautious re-entry into her enclosure. Calamity immediately went back to the house where the babies had been alone since I had been with her last. Calamity lay down, and I gently reached in and lined the babies up and held them until they had a tight hold on a nipple. The babies began to eat again and Calamity was happy until, of course, I left her den. The entire feeding process took about one hour and the cubs needed to eat every 2 hours. This process went on 6 times a day for the next two cold and rainy days. At the end of the second day, as the evening feeding came, I was not feeling well. It was raining and I was cold. I tried to take shelter from the wind as I crouched outside of Calamity’s house. I began to shiver and cry. I was worried about all five of the babies. Calamity’s four and my Destiny. Calamity had become dependent on our relationship. Without my intervention, her babies wouldn’t have a chance, but my health was failing in the process.

The Miracle
What happened next was unimaginable. Nothing could have prepared me for the following events. As I shivered and cried, Calamity looked at me with concern. At that moment, the barrier that separated tiger and woman turned into a simple and powerful bond of motherhood. Calamity reached out with her long teeth and wrapped them around my right forearm. She gently pulled me into her house with her and the four cubs. I have to admit I was terrified, but my exhaustion, freezing body, and depression were greater than the fear. Calamity stood taller than me as I sat on the opposite side of the babies in her 8X4 wooden house. I didn’t know what was going to happen next. Then she reached over with her massive mouth and began licking the rain from my arms, hair, and face. I was finally warm and safe from the weather. I stroked her sleek fur and snuffled to her with gratitude. I laid my head on hers in disbelief that this insane scenario was occurring.

The following two weeks were filled with increased trust and continued miracles. We laid together with the babies between us and slept for hours. My pregnancy went smoothly from then on. Calamity wrapped her giant paws around me as we slept together six times a day and sometimes the feedings would run together with me too sleepy to leave between feedings. It is difficult to explain the oneness and security that overwhelmed me. I felt no fear. We became two mothers trying to survive our fears through the comfort of one another.

I honestly believe Calamity felt the same oneness as I did. She often gently laid her giant paw on my round belly, waiting for Destiny to kick. When she felt the kick, she would shake her paw and look curiously at it, then lay it once again on my belly, waiting for another kick from Destiny. In time, she would lay her paw on my belly and Destiny would immediately kick as if she new Calamity was there waiting. Looking back now I can’t tell you how or why all of it happened, but what I can tell you for sure is that Calamity gave me the strength to see the beauty in life even in its darkest of hours. I owe her not only my life, but the life of my Destiny, and in the following years, my boys Dakota and Dustin- we are now a complete family with my amazing husband Derek.

Calamity never learned to take care of those babies on her own. She needed me to help her until I finally took them away and bottle fed them at the appropriate time in baby tiger development. She was more than ready to let go of the babies, but neither of us was ready to give up the bond that was forged between the two of us. In the following years, over the course of our lives together, I would often find the two of us sitting on opposite sides of the fence staring into each others’ eyes, wishing we could go back in time and experience the miracle one more time. I never did re-enter her enclosure. It was a once in a lifetime experience, culminating from an incredible series of events- events that will never align in my lifetime again.

Today I re-entered Calamity’s enclosure for the last time…simply to kiss her motionless body good-bye and to thank her for the 19 years we shared…in particular two unbelievable weeks that changed my life. What an unforgettable journey we have had. 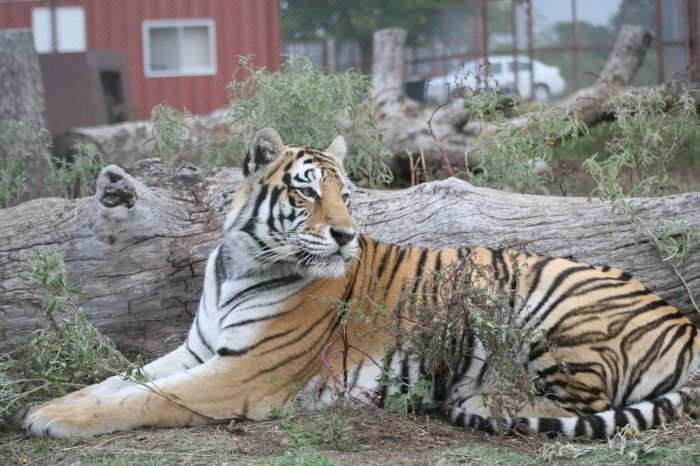