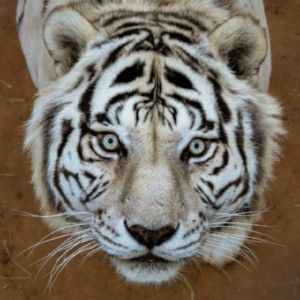 For the past two months there hasn't been a night where I have gone to bed without thinking of Clyde. Well into the night, I would research his strange condition. When he first got sick I was very worried, but I felt so strongly that he was going to get better. I moved him up to the house in a transport cage so that he could be monitored and given the loving care he needed. I felt like he was going to be one of CARE’s great victories.

I wanted you all to understand how difficult it is to care for a sick tiger so I started posting bits and pieces of his medical care on Instagram and Facebook. I could see that he wanted to eat, but his body would not allow it. We tried every kind of meat and texture that we could think of. Finally the answer came in the form of ground beef in a baby bottle pureed in a blender. He ate 10 pounds of beef over 10 days. It wasn't enough for him to survive, but it made him strong enough to go back into his enclosure with his sweet sister Bonnie.

Everyone was so excited at what appeared to be Clyde's rebound, so the idea of having to tell people that he had begun to slip again over the past weeks was a painful one. I moved him back to the house so he could be given a second round of TLC. We could only get him to eat a few bites of meat a day. I made the decision to move him back to be with Bonnie in the hopes that maybe their special bond would aid in his recovery, but it still didn't work. A part of me wanted to tell everybody what was going on, and then the other part of me thought "Why should anybody else have to go through this torture?". Every day, despite our desperate efforts, we watched him wither away more and more. It was one of the most heartbreaking breaking months I've ever had. The helplessness was unbearable. CARE Curator, Rachel, and I had tried to feed him constantly through the last few weeks but he ate nothing.

I talked to doctor after doctor and I read through mountains of documentation concerning diseases that affect appetite. I tried experimental medications and our vet, Dr. Bill came and sedated him several times in the hopes of finding some sort of answer. Ultimately we couldn't find anything.

It's very hard to make decisions about letting go. Almost 15 years ago I held tiny Clyde in the palm of my hand only moments after he was born. His mother was being boarded at the facility before CARE was even CARE. I had no idea his mother Kenya was pregnant.

One November morning I watched Kenya, the giant white tiger, give birth and clean her little baby. She chewed the umbilical cord as all good mothers do. She chewed shorter and shorter and shorter... Then I realized she was trying to chew on the baby's leg. The crazy person that I was years ago, ran into the enclosure, distracted Kenya, and took the little baby away. You all know that baby as Bonnie. I saw something else in the corner of her house- the remains of a little, newborn tiger. Kenya had killed it and ate most of it. The terrifying sight reinforced that I was making the right decision by taking little baby Bonnie away from Kenya.

I took Bonnie to the house, I clamped her umbilical so she wouldn't bleed to death, and I handed her to one of my kids. When I got back to Kenya, she was having another baby. Before she had a chance to eat this one, I went back into her enclosure, I quickly distracted her into leaving her house, and I lifted the lifeless little baby into my hand. It was a boy - a lot smaller than Bonnie, and his lungs were full of fluid. I flipped him upside down and cradled his shoulders. He still didn't breathe.

After several massages and breaths (and a mouth full of amniotic fluid from mouth-to-mouth) sweet baby Clyde took his first breath. It was the first breath of over 100,000,000 breaths he would take in his lifetime. The exact moment of holding a little baby tiger in your hands as it takes its first life-giving breath is something that is indescribable - as is the moment when you hold them as they take their last breath.

There were so many special things about Clyde - so many things that make me feel blessed to have been able to see, feel, and experience between his first breath and his last. So many snuffles... so many kisses... so much love...

Where ever you are please take a moment and appreciate those in your life who bring you joy. Celebrate each breath you share with your loved ones, and on this special day, let's give a little extra thanks for that fuzzy faced white tiger named Clyde and the 100,000,000 breaths he shared with us all. 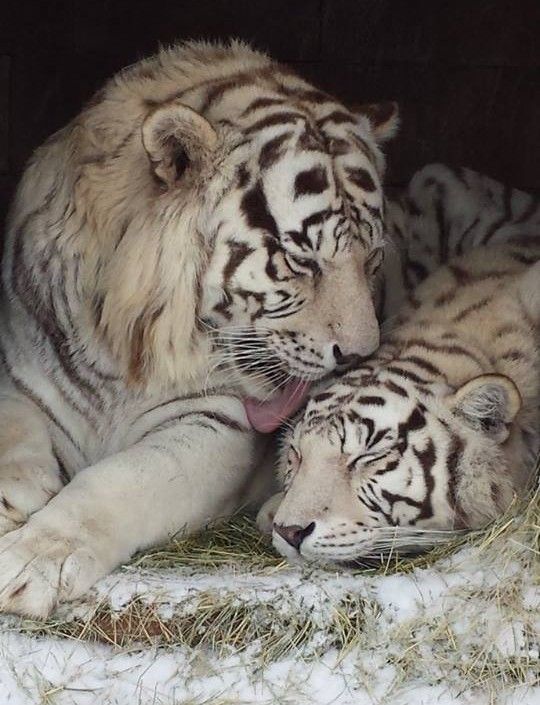 Clyde is a unique looking white tiger. His dusty white coat and brilliant blue eyes glisten when any kind toy is present. Clyde was a professional fighters pet until the novelty wore off.

Clyde is one of the lucky Big Cats who will spend the rest of his life at CARE full of the unconditional love he deserves. Clyde is one of the few truly nocturnal animals at the sanctuary. While all others are asleep Clyde is waiting at the edge of the enclosure for individual attention. He is quite the night owl!