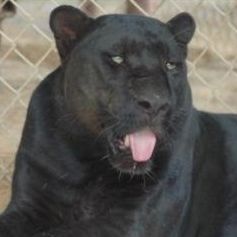 We have another sad announcement. Yesterday, April 9th, we lost the uniquely handsome black leopard, Eerie. Many of our supporters know of Eerie's lifelong battle with a variety of health problems including spinal curvature and neurological issues. The closest thing, in human terms, to what Eerie suffered from is Marfan Syndrome.

Eerie was not supposed to ever see his 5th birthday. He had to prove everyone wrong and make it almost until his 13th!

Lately he was looking a little worse for wear, and yesterday took a dramatic turn for the worst. We don't know exactly what the problem was, but it was surely a complication of his condition. It could have been his heart, it could have been kidney or liver failure due to the lifelong use of steroids to give him good quality of life. Whatever it was, we had brought him back from the edge before, but there was no recovery in store for him this time. We made the decision to help him along his way, and he went very quickly.

We knew that Eerie was a miracle, and that each day he had was a day he would not have gotten almost anywhere else. He was such a special cat to so many people, just for being "different". He was extremely affectionate with his female CAREtakers, giving love and kisses freely, although he was never much for male companionship. He will certainly be missed, but we at CARE celebrate his extraordinary life instead of mourning it. 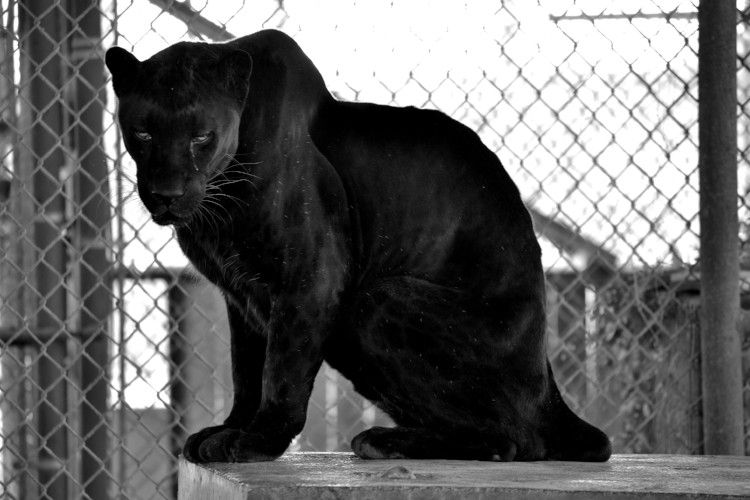 Eerie is one of three black leopards who reside at the care facility, but of the three he is definitely the most recognizable, as he has no tail. His tail was severely injured when he was young by another cat and had to be removed. Even though he doesn't have his tail and he isn't very tall, he definitely has the dark and handsome thing going for him and he knows it! Eerie is such a ladies man…he lures the women of CARE in with his exotic looks and sweet kisses. Eerie was named after his birthplace, Eerie County New York, but if you didn't know this fact you may think he got his name from the "eerie" glow of his beautiful green eyes. Eerie also has another physical abnormality that isn't as noticeable as his missing tail; he suffers from a genetic spinal defect. An abnormally large growth spurt at 2 years old only added to his spinal curvature. Eerie now has to take medication every day keep him comfortable and happy. Eerie is an amazing example of being perfectly imperfect. It is this fact that causes so many who visit CARE to fall in love with him.