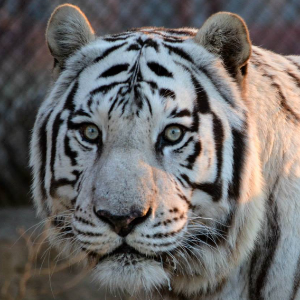 Kannapalli was a lot of things to a lot of people. For most who met him, he was a beautiful, easy-going, huge white tiger with incredible (even-for-a-big-cat) strength. For a lot of the interns and volunteers who cared for him, he was certainly those first things, but add also the fact that he was startlingly food-motivated, and that he was a bit more messy than your average tiger. He had no qualms about strewing blood and bone into all corners of his enclosure whenever he was fed, and I suspect he believed his pee to be a highly sought-after commodity because he tried to "gift" it to almost every person he ever met. It's not uncommon for lions and tigers to "spray" in the general direction of people who approach their enclosures (some of them treat pee-spraying like it's a handshake), but Pawi took it to the next level. It was like his art, and the world was his canvas. I couldn't even *begin* to guess the number of people who were caught in his yellow crosshairs. I'm not kidding, he was a master sharpshooter when it came to his pee. For instance, years ago, I saw him 'tag' five people at once with a spray.

If that's not talent for one's craft, I don't know what is. It was one of the most impressive things I've ever seen. He was always so matter-of-fact about it too. Some cats seem to get a genuine kick out trying to spray people - it's like they're smiling and beaming with pride at themselves after the fact. Pawi treated the act with a degree of professionalism as if it were his job.

Me: *does a leaping barrel-roll to get out of the way of the blast*

Pawi: 'Come back and visit!'

I know that last bit may seem a bit juvenile considering the tone we usually try to achieve in these memorials, but there is an ultimate point it it - I want to paint the full picture of Pawi as best I can - the full, smelly picture. I want you to know who he was.

For my wife, Heidi, CARE's founder and Executive Director, Kannapalli was the epitome of an angel. She told me a lot of things about him and who he was from his earliest of days to his final days. While I don't want to speak on her behalf, I will say that their connection was one of beauty and magic. They shared a deep and soulful bond, one that I witnessed on countless occasions. He always had a bright, 'Hey, how's it goin'?' attitude with the people he met, but he positively lit up with joy whenever Heidi was around. He snuffled his whisper snuffles so much at her, you'd swear he was a leaky air compressor masquerading as a tiger. It was always a wonderful sight to see.

For me, I didn't have a bond with Kannapalli that was closer than the average bond I have with the other lions and tigers of CARE. Him and I loved each other very much, but there was nothing particularly out-of-the ordinary between me and him. Pawi and I didn't have a super-secret man-tiger Wonder Twins connection, but he was my 'first favorite' so to speak. I admired him deeply, and that admiration only grew the longer I got to know him.

Of course, the first thing I came to recognize and admire about him was his physicality. In his prime, he was by far the strongest tiger I've ever known. He was an absolute beast. I've seen him, with ease, lift and manipulate items that would make even the biggest of bruiser tigers struggle. He was known for breaking and crushing supposedly 'indestructible' items/toys/materials (like the time he cracked a bowling ball in half in his mouth) and his enclosure was probably the most stoutly built in the compound.  He was a borderline super-tiger, but here's the kicker - he didn't really ever let that influence his attitude. He never tried to be a bully, he never tried to be an intimidator. It was like he was oblivious to his awesomeness, either that or he just didn't care. Either way, that element of his being was the first thing that made me fall in love with not just him, but who he was and what he represented. To me, Pawi became the embodiment of that simple, yet resonant, lesson we learn as children - what matters in this world is not who we are on the outside, but who we are on the inside.

He reaffirmed one of the most valuable lessons I've ever learned in my life just by being him.

That was the other thing - he was unabashedly & unwaveringly himself. Don't get me wrong, that's kind of a universal thing with big cats - they are pure and perfectly themselves, sure, but they do change up their tune somewhat based on their mood & who's around. With Pawi, however, you could always count on his tune to be the same (unless you were Heidi, then he played the 'Yay, my mom is here!' song). His tune was always that of a sweet clobberknocker who never cleaned up after himself, was in a romantic relationship with a stuffed duck, would get a bit wacko when chicken drumsticks were around, and had dreams of peeing on the entire world. He wasn't defiantly making any "This is who *I* am!" or "I don't *care* what anyone else thinks!" statements either. That was just him. He was simply comfortable in his own skin & he didn't really ever factor what other people thought. He liked people, it's just their opinion of him never seemed to enter into his calculus for how to present oneself to the world. I loved that about him.

When he got old, someone must have forgotten to tell him that fact, because he just kept on going as he always did. Of course, he started to get more sleepy, and his joints became more stiff, but he still went crazy for chicken, he still whisper snuffled every chance he had, he still flirted with the girl tigers within his view, he could still pick up the heaviest of horse heads like they were nothing, he still tried to pee on anyone and everyone, and his sweetness remained steadfast, strong, and simple.

Kannapalli lived life on his own terms, nothing more, nothing less, and to that end, he was quite simply one of the most incredible beings this world has ever known. 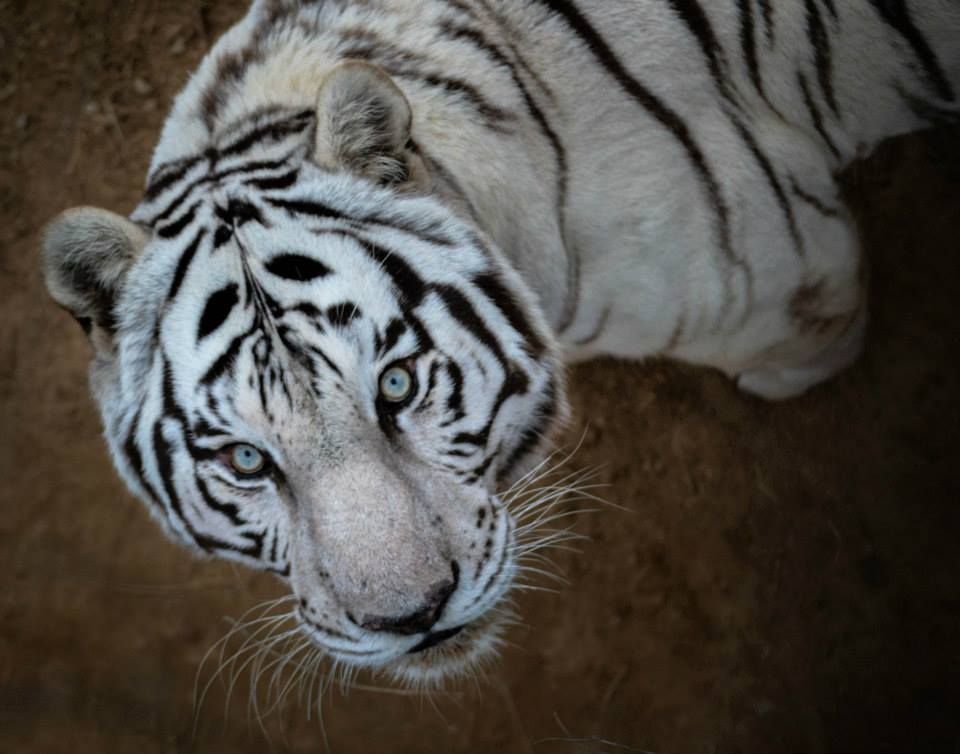 Kannapalli was one of our resident big-boys. He was the tallest and longest tiger to live at CARE. He was stunning and formidable looking, but he has a heart of gold!

In his younger days Kannapalli was infamous for his desire to mark his territory. He had excellent aim and seemed to take pleasure in surprising people - especially volunteers cleaning his enclosure - when they aren't looking. He tended to be a tad food aggressive as well and knew exactly how big and strong he was.

As Pawi got older, he became a mellow old man. He still liked to talk, he loved to vocalize whenever people were around. Sometimes he got so gabby that he would tiger-talk to you all day if you stayed and listened. But now, his chatting was done in a whispery voice. Every evening Pawi would go on a walk around his large enclosure, making sure that everything was still in its place, saying hi to his neighbors, and inviting anyone around to come walk with him.