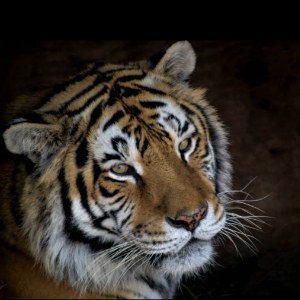 What first seemed to be an abscess under her chin that appeared overnight a few weeks ago, and then was assumed to be a snake bite, turned out to be a secondary infection in connection to very aggressive cancer.

Kate had been unresponsive to the meds were had been giving her, and even Dr. Bill coming and sedating her to treat the wound made no difference. Kate has not been getting better and after she had retreated to her shelter to be as far away from everyone as possible, we finally sedated her yesterday to take a closer look. We found a large tumor on her neck and the evidence of malignant melanoma. The decision was made to euthanize her to end her suffering – she was eating with difficulty and was clearly not going to recover. During her post-mortem exam, we found her lungs ravaged with cancer. While she was not showing signs of any respiratory distress before, it would not have been long until it would have been impossible for her to breathe.
This is a very sad time for us, especially since we have lost so many cats to cancer – melanoma specifically. It has certainly caused us to raise many questions about why. As we have looked back over our losses in previous years, it has become clear that the cats that have been diagnosed with melanomas have all been related in some way. Our research partner, Dr. Brian Davis from the NIH, has been interested in this commonality and obvious genetic connection and that is why every time we experience a loss like that we send him valuable genetic information to continue his research on cancer.

The cats here are interesting to study in relation to why melanoma occurs and why it is more prevalent in certain bloodlines. Unlike with humans, there are so few factors that may be contributing to cancer – just their diet (which is always meat), their water source, their stable and relatively unpolluted environment, the sun and of course, their DNA. They don’t use cellphones, they don’t eat produce treated with insecticides, they don’t drink alcohol or smoke, etc. It is so important that we work to unlock the secrets of cancer – not just for them but for everyone who has been affected by it. Loss is painful, and Kate will be missed and will always be loved, but she will follow others that will have their passing hopefully play a part in discovering ways to beat a vicious and unfair disease. Cancer really does suck and we are tired of it taking away animals and people that we love.

From Derek Krahn, CARE Operations Director and Board Member

Why are the difficult ones the hardest to lose? Kate was feisty and spunky, no doubt about it. I've even heard people, in moments of tongue-in-cheek passion, refer to Kate as being a downright "wicked little girl". Whatever people thought of her, you couldn't deny that she was memorable. She had something about her- a restless, extra-wild quality that made her difficult to live with if you were a tiger but amazing to be around if you were a person.

She was no stranger to trouble and mischief, and she had a habit of regularly starting fights with her old enclosure mates, Donya and Savanna. I can't tell you how many times I had to break up scuffles that she started. I would often disapprovingly scold her for being a brat - something she seemed to take rather personally. She would lower her head when she was being given a stern talking to as if she knew she was being a bad girl, but that she also couldn't help herself. Such conflict!

Aside from being spritely and spirited, Kate was also very independent - fully capable of enjoying her time on her terms. Despite her independence, she always welcomed her people-visitors with warmth and affection, and she would look at her people-visitors in a peculiar, analytical, way. Oftentimes when she would look at you, it seemed as if she was bemused and thinking to herself, "What are you all about? What's your story?" as she just sort of soaked your various elements in.

She could be so silly and so in the moment. She would get into these playful moods where she just wanted to snuffle and roll in the sunny grass forever. I would often watch her being beautiful in those moments, but then again, it was difficult for her *not* to be beautiful. In my humble opinion, she was by far one of the most physically beautiful cats in the compound. Yes, I know, all the cats are beautiful, that's true, but you know what I mean. She was gorgeous, but in a subtle way. She was the embodiment of a windswept ember- crackling, and burning, and dancing in the air.

She also had some of the BEST food anticipation faces. Expressed SO much excitement when the tractor came around! Eyes and mouth as wide open as they could go, absolutely adorable! 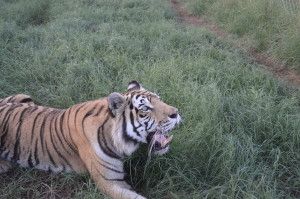 If she loved you, she loved you. It was a simple transaction. It wasn't conditional, and it wasn't complicated. She was so full of life, and I'm not just talking about her energy level, but how she chose to take it all in. It was so beautiful to be around her, to see her, to learn from her. I miss her.

She lived well past her wild life expectancy, and I take comfort in the fact that we gave her the best possible life full of love and safety, but I can't help but think that she was still gone too soon. She was nearing her 15th birthday, a ripe, respectable age just shy of being considered full-blown elderly for a tiger, she was a small girl, and she was in fantastic shape. I took it for granted that we had at least three or four more years to enjoy her whimsical wildness and her sky-meat faces, so when her health declined so rapidly, it was like getting kicked in the chest - brutal and unexpected. Cancer took her when she should have had more gas in her tank. I know it was foolish of me to make assurances in my head regarding a cats' longevity, but I was convinced her spark would make it to 20. I was convinced she would become a happy, hobbly, snuffly little old lady with scruffy cheeks and lights still in her eyes, but that wasn't to be.

This loss will haunt many of us for years to come. A dancing, burning, beautiful ember disappearing into the night's sky. 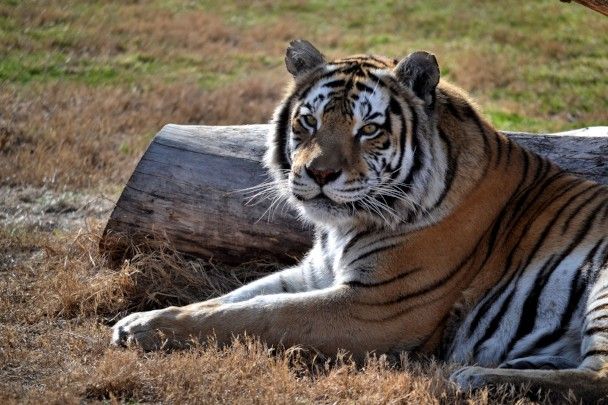 Kate is one of CARE’s feisty Tigers. She lives in a large enclosure on the western side of the center with her friends Rascal and Donya. Kate also has a reputation for being a bit of a dirty fighter. She is a very smart and cunning kitty, so you need to watch out! She knows the exact moment that a person lets their guard down, and her instincts are very strong. Despite her wild side, she is a very loving and curious kitty. If you let her, she will spend a very long time analyzing a person’s face and soaking in all of its details. She greatly enjoys saying hello and interacting with people (this is usually after she scares the daylights out of a person by crouching down and “jumping” at them from behind the tall grass around her enclosure). She’s got a lot of spunk and she’s a great cat to have around!