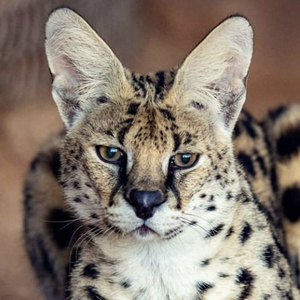 Our hearts are heavy. We are so sorry to inform everyone that our sweet serval Kevin passed away.

Kevin first became ill in December. He was treated aggressively for pneumonia. After weeks of care, he seemed to recover. However, a few weeks ago he started showing symptoms again. We took him to the vet for imaging of his lungs, which showed that his chest was filled with fluid. As our vet team was preparing to drain the fluid around his lungs, he stopped breathing. Despite their best attempts, Dr. Bill and his team could not get him breathing again.

We have been waiting for lab results for some answers, and we just got the results. Unfortunately they did not give us anything definitive other than a horrible infection. We will never know exactly what happened, and that makes the loss even harder.

Kevin was a gentle soul. He could be unassuming and shy, and sometimes that made him hard to get to know. But those that spent time with him, saw his good nature - his patience, sweetness, playfulness, and silliness that we came to fall in love with. We miss him so much.

We hope, in the few short years he was with us, that he felt safe and knew how much he was loved.

Kevin was originally kept as a pet by a couple in North Texas. After a divorce, he was rehomed to another private owner in central Texas. His neighbor, knowing it was not an appropriate home for a wild cat, worked for a year to convince the new owner to rehome him to a suitable facility - and that is where CARE came in.

Kevin communicates many things by hissing, and it is not always a bad thing, it is sometimes just how he talks. But he is a  confident and resilient cat and we look forward to giving him the best life possible here.

We want to thank Guiia Koplin for tirelessly working on getting this boy into a new home, Veterinarian Dr. Jonathan Cohen for lending his expertise and service, and Nick Phomkasornsri for working on finding the right place for him to spend the rest of his life. You are his heroes!