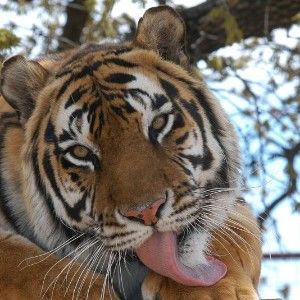 Today I got word that a friend died. At my age I’m pretty sure I’ll hear such things with more frequency but I doubt the words will get easier to hear despite the knowledge.

The Sunday before last I saw her for the last time. She’d lost a dramatic amount of weight. Gone was her majesty, her power, but her beauty remained even in her thin and frail form. She was still awe inspiring to behold.

She heard my voice. I was filled with a quiet sense of joy as she appeared from the shadows to see if it was me that she heard greeting her neighbor. That she cared enough in her weakened state to come see me was something beyond touching.

The first time I met her we took a walk and chatted for quite some time. She groaned and chuffed and spoke her mind as she was known to do. Three times we walked the expanse of her home’s fences, which kept us separated for mine … no … her safety and she spoke to me and I to her.

I was talking to a tiger!

Lyddia was an unexpected love of mine. We’d barely met earlier this year. I’d not even set out to meet her or my other two great lives in Bridgeport. It wasn’t MY dream. I was merely a tag-along on my wife Jill’s path toward fulfilling her own longtime dream of being around these great creatures. That didn’t shield my heart from what I would feel in Acari, Donya or Lyddia’s presence.

We learned early that tigers choose you. They like you or don’t for reasons that are their own but any deeper connection is up to them. I would like to believe she chose me that day. That our talk, which she initiated and maintained through twelve turns was her way of saying, “I’m choosing you.”

Our bond did not supersede that which she had with her caretakers or her adopted father, Gary. It was not as familiar or invested as those bonds but that made it no less important to me. I felt special in her presence and she held my eyes in hers.

Three weeks ago I asked Jill if she would take me to CARE again. I guess deep down inside I knew something was up. I knew I might not get another chance to see Lyddia again and I needed to.

She did sit with me and talk with me two weeks ago. Lyddia lacked the strength to walk any distance but she tried her best to walk at least some so that we might relive our first moments together … and she spoke in her low grumbles and moans. Like some four-legged and stripped lady Chewbacca she shared the some final thoughts with me. I only wish I knew what she was saying.

Today I learned of her passing. I read the words and I found myself weeping … over a tiger … over a friend.

Then it stopped and I felt a sense of warm gratitude wash over me. That I met her at all was a wonder to me. What twists and turns in life had brought me to that point where we would meet at all?

Yeah, I’ll miss her deeply. Knowing I will never have another opportunity to be in her company leaves me saddened. That I knew her at all, though … that is my honor.

To my friend I say farewell. 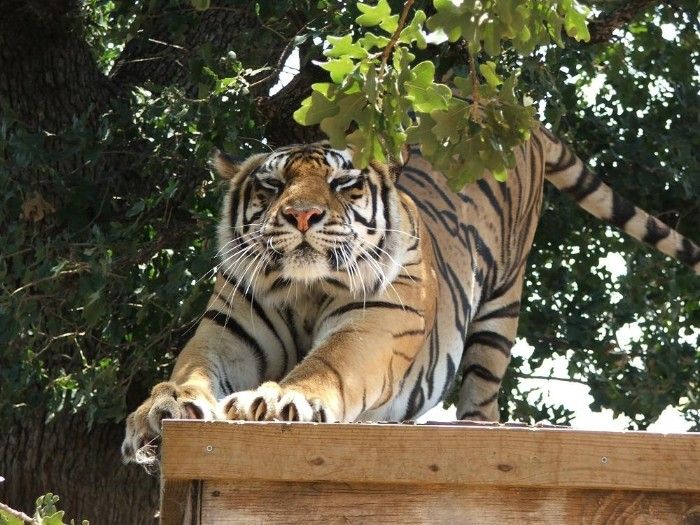