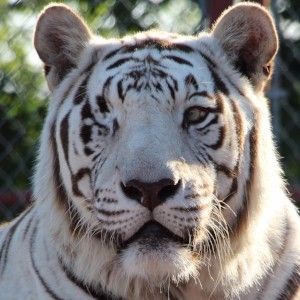 From Derek Krahn, Senior CARE volunteer and board member...

Sad news, Pride. Yesterday afternoon Solano made his final journey to the great beyond. As an elderly, large-male, white tiger battling cancer, his health had been on a slow descent for a fair bit of time. Recently, his not-so-good days overshadowed his good days, and we made the decision to put him to sleep before he would have had to endure the inevitable and rapidly approaching collapse of his wellbeing.  It was a sunny, beautiful day, and the weight of summer’s heat had just given way to the first hint of Fall’s comfort. Despite him being tired and ready to go home, he still had brightness, moos, and love left for his CAREtakers right up until the end.

I wasn’t able to be there for his big day, but that’s how it goes sometimes. I did get the fortunate opportunity via Heidi to video chat with him shortly before his appointment with Dr. Bill. There was nothing I could say to him that I haven’t already told him dozens of times already, but I was so happy and grateful to simply see him and to hear him talk in our final goodbye.

I’ve been anticipating this day for years and I made my peace with his unavoidable passing a long time ago. He somehow had far more sand in his hourglass than anyone could have ever figured, and his death doesn’t feel at all like some sort of cruel injustice of fate. The ones whose passing feels unfair are almost always the ones that hit the hardest, and Solano was soundly beating the house before he cashed his chips in. That being said, this one hit significantly harder than I expected it to.

The decision to euthanize him was made and scheduled days prior to the actual event. During that time, I approached his upcoming journey with a matter-of-fact sense of glum practicality. After all, this wasn’t an unexpected thing and it’s the nature of being a part of the CARE experience. During the video call, Heidi held her phone up to him and I started to tell him that I loved him and that he was a good boy. He started ‘chatting’ into the phone and that’s when it hit me. It’s not like he ever knew what a phone was, and I know he was just saying ‘hi’ to Heidi in that moment, but it didn’t matter – I got to hear him talk one last time and it broke me.

After that, I could barely string more than two coherent words together, and when I started to apologize, Heidi said in a voice of calm, gentle strength, “Don’t ever be sorry, baby. He knows you love him. He knows. You’re his favorite.”

I don’t know how accurate that last part is considering her and Destiny and so many other members of CARE had loved and cared for him and spent so much more time with him in the last few years than I had been able. Either way, it was a very loving thing for her to say and a very comforting thing for me to hear in that moment.

Solano meant so many wonderful things to so many wonderful people. Over the years he became a larger-than-life figure known literally across the world and I know people are going to mourn the loss of his magnetic personality and his monumental presence. For me, I’m simply going to miss my buddy who was always so excited to tell me about his day. I’m going to miss the sparkle we put into each others’ eyes.

I’m forever thankful that his life and his death was not unfair. He was my friend. I love him, I’ll miss him, and I hope to see him again someday.

Solano is a very special white tiger. He has one of the most beautiful personalities of all the cats at CARE. Solano was unfortunately born with crossed-eyes. This is a not-uncommon problem in white tigers, particularly those whose parents were related and bred to ensure white offspring. He was seen as worthless to his previous owners because of this defect, so CARE gave him a home.

In 2014 we noticed a growth on one of his eyes. It turned out to be cancer, so in order to hopefully keep it from spreading, the eye was removed. Because his vision was always limited with crossed-eyes, he possibly sees better now with one eye than with both! We have seen no signs of cancer since then!

Solano is a favorite with CARE visitors because he is SO talkative and moos like a cow. He will tell you all kinds of stories if you listen. He also loves to play - running around with joy on his face and being adorably goofy.