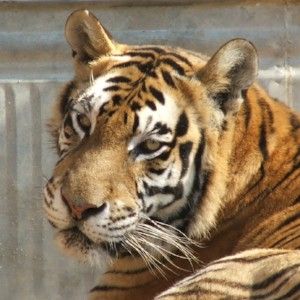 About 5 years ago Tabby began to deteriorate in health, which is normal for a 17 year-old tiger. As days went by, she showed signs of a desire to make her final journey. Several months later she fell to depression and sickness: she would not leave her house, sores appeared all over her body—we knew we had to do something quickly. This is when we moved Tabby to the vet center. Her health improved immediately with the love and attention offered there. We then moved her back to her outdoor enclosure, where her health again took a turn for the worse. This process happened 3 times in the following 6 months until she finally did not have the strength to stand. I went to her enclosure, very sullen, and sat with her trying to make the decision if she was able to make the trip just one more time. The interns brought the transport cage to her enclosure. After coaxing her, Tabby (literally, falling side to side) staggered into the transporter.

We brought Tabby to the life-giving vet center, which is where she has lived for the past 5 years with a small indoor and outdoor area. She had a mattress to keep her tired bones comfortable as well as pillows and blankets and many stuffed animals (her “babies”) to play with. She carried her “babies” as if they were her own, cleaning and loving them, almost as if she were giving them life and they giving life to her. Her greatest gift of all was not in what people had given to her, but that of what she had given to them. It may be our love and interaction that had given her the desire to live the past 5 years, but it is her overwhelming strength and love that keeps us going even today. Tabby passed September 22, 2008 at the wonderful age of 22.