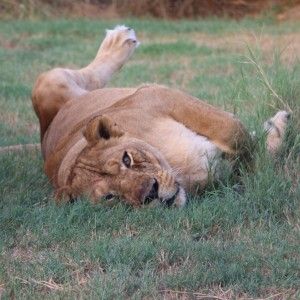 There will never be anything I can say that will memorialize Tabula in just the right way. So, instead of trying to write a perfect memorial for a perfectly imperfect lioness, I'd like to think of it as my love story - the story of how I fell head over heels for an incredible, loving, spirited, stubborn, goofy, grumpy, absolute mess of a cat.

Tabula had only been at CARE a few days when I first met her. She looked like an overstuffed, and slightly worn, teddy bear. She had bare, black skin on her ears where the flies had bitten and bald spots on her elbows where the fur had been worn away. Her face was wrinkled and slightly scarred and she was fat! Rolls cascaded down her body and squished her face into a permanently confused expression. That lovable, sweet teddy-bear look was very misleading! 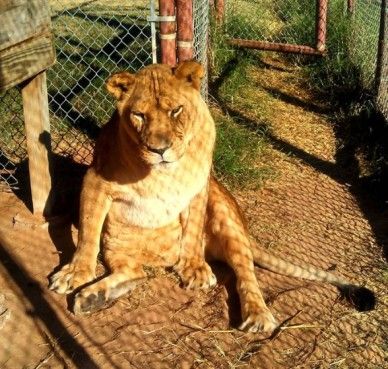 I hadn't considered that she might be scared being in a brand new place, surrounded by strangers. I didn’t know that she was half blind, probably adding to her fear. And she WAS scared. She was TERRIFIED. And fear does not a friendly lion make! When I approached her, she lunged at the fence between us, snarling and growling with more ferocity than I had ever seen. She scared the daylights out of me, as well she should have. After that, I stayed as far away from her as possible.

Her previous owner asked CARE to take her in. However, it was a rough transition for Boo. When she got to CARE, she didn't know where she was, who we were, she couldn't see well, and she was all alone. Just image how that would feel. My heart broke for her, and I began to understand her fear and aggression.

Over time, she stopped being so afraid of the grass under her feet, the huge Texas sky over her head, and the activity that surrounded her at the facility. She ventured out of her small lock-down area to explore. She was fed a good diet and started shedding some of the weight. She basked in the sun and her anger and fear diminished. While she had started enjoying her new home, she was still scary to me. But one day, it just happened. I remember locking eyes with her and being frozen in my tracks. Intense is the word to describe those eyes! 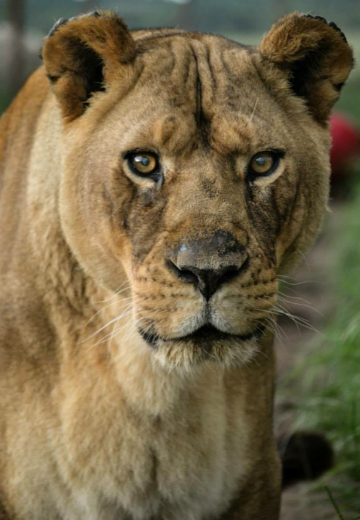 We stared at each other for what seemed like an hour. Then she rubbed the fence, smooshing her wrinkly and worn face against the chain-link. As she rubbed, she made low growly noises. They weren’t threatening sounds, but what I came to think of as lion purrs.  She flopped her massive body on the ground, rolled on her back, and started swimming with her big floppy paws in the air, doing some weird lion version of an upside down breast-stroke! She made me laugh out-loud and I warmed to that big, scary lioness. 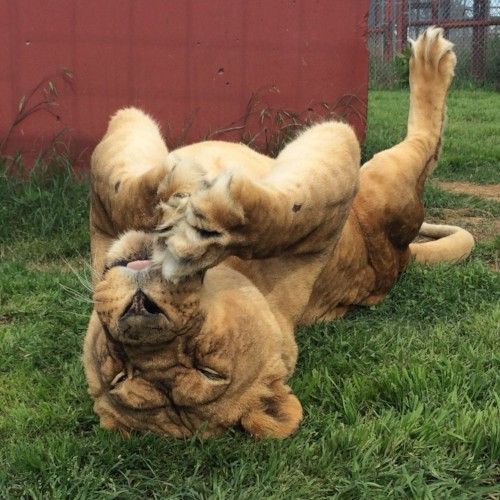 That silly backstroke became her signature move when she was feeling frisky and that single interaction started a relationship that I would have with her for the next 5 years. Over those years I grew closer to her and I learned her quirks, like how to start calling to her long before I approached her enclosure to let her know I was coming so she wouldn't be surprised. Or, when I sat down next to her, to get up very slowly so I didn’t startle her. Being half blind made things a little scary sometimes.

I learned to gauge her mood and I learned that she liked it best when you talked to her in a high, sing-song voice. She would even "swim" along with your voice, stopping when you stopped and starting back up again when you did. I learned that you had to put her food right in front of her face so she could find it and good luck locking her up in her lock-down area - somewhere she went willingly on her own but don't you DARE close that door on her!

She was not always volatile though, most of the time she was content lounging around and rolling in the grass. She was happy to have her friends sit down by her enclosure and talk to her. I did that often, benefiting from the comfort she brought me and wanting to comfort her as well. 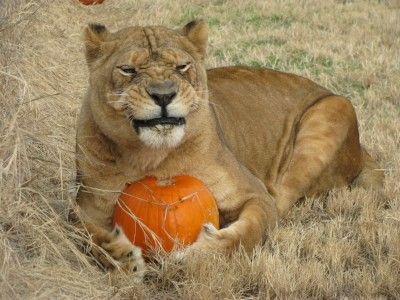 While I got a lot of time with Boo, it was never going to be enough. That's been really clear in the last few weeks. But, the reality is that nothing can prevent old age, not the best care in the world can do that. I just have not been ready. I have not wanted to say another good-bye, and to one so special. She was still so full of life, so spunky, still Boo.

But, her body was giving out, she was tired, and she was hurting. It was her time, like it or not. And in the end, all that really matters is that as long as she was here, she was loved, and I was one of the lucky ones that got to love her.

Now, I look at each and every picture, video, message, and tribute to her since she passed away, just as I always do after a loss. I see how many people she touched and how many people cared about her.  It warms by heart when I need it most. I added some of my favorite posts from the people that knew her best at the end of this story. She left behind an army of people devoted to her!

In the end, Tabula found a home here with us and she thrived on the love given to her. She was a testament to the devotion that is given so freely by the CARE family. I miss her terribly, I think I always will, but I am so glad I got to know her. Love you so much my Boo, my precious girl!

“How lucky I am to have something that makes saying goodbye so hard.” – Winnie the Pooh

Tabula arrived at CARE in the summer of 2010 looking like a fat, stuffed, Thanksgiving turkey. She was scared, and she was unhealthily overweight. CARE rescued Tabula from a private big cat owner near Midland, TX where she lived some ten years in conditions big cats are simply not meant to live in. She was declawed and living in a cage which was roughly 10’x10’ with low ceilings and concrete floors. She ate mostly turkey and milk every day, which, coupled with no space for exercise, contributed to her tremendous weight gains over the years. When she first came to CARE, she did not know what grass felt like under her paws, and she didn’t know how big the sky could be. Those first few weeks were a stimuli overload for our poor lioness, and she spent almost every minute of every day hunkered underneath a wooden house inside a small lock-out enclosure. She wanted to make her space feel small, which in turn made her feel safe because it was all she had ever known. Her CAREkeepers had to be extra careful with this special girl so as to not upset her during the transition. They had to make sure to limit their interaction with her and take baby steps in getting her acclimated to her new surroundings. Slowly over time, she started to warm up to people, (mostly male volunteers at CARE- no one really knows why, but oh well, that’s lions for ya!) and because she finally had space to walk around in, and she was also being fed high-quality livestock meat on a proper feeding schedule her weight finally started to shed (at least 200 pounds!!!). She is fast becoming one of the funniest, quirkiest, and most popular cats here at CARE. She constantly has a puzzled look on her face, and she spends a lot of time rolling around on her back and “paddling” the air with her paws. She started off her stay at CARE scared of the grass under her feet, and now she struts around like she owns the place!!