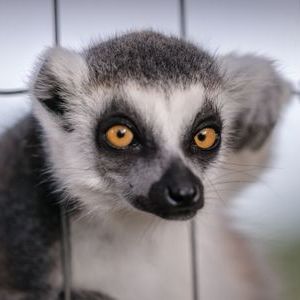 On July 17th, we were brought a two-month-old baby lemur that had been purchased as a pet. She had not eaten in two days, and we made the decision to see if we could save her...knowing the odds were against her. When Momo arrived, she weighed 97 grams, one-third the weight of a healthy two-month-old. The first few days were filled with uncertainty. It was a constant battle to get her to eat, but after 2 weeks, she was up to 150 grams! While the first few days were spent just seeing if she would live, we knew we would have to introduce her to other lemurs soon if she would have any chance of a normal life. Lemurs are incredibly social animals, being hand-raised leads to severe psychological issues and aggression and living a life alone is a horrible fate for these primates. So, about a week after she got here, we started walking her down to see our two troops of adult lemurs. Hearing, seeing, and smelling each other would be the first step to an introduction.

Every day, she would go on several small visits. We chose the smaller troop of three, with Mort, Miss Stewart, and our gentlest female, Rita, to be the best family group for her. After two long weeks, we were all set for a full introduction in a secure environment. It was time for Rita to meet Momo.

It was a very tense and scary situation - a bite from Rita could end Momo's life in a split second. But, Rita proved to be the gentle, patient, loving lemur that we knew she was! The introduction went far better than we ever expected.

Our incredible luck with Momo continued to hold out when after two days of bonding with Rita, it was time to bring in Mort and Miss Stewart. The introduction was perfect. The group was so happy to be together again and Momo was an accepted part of the family! They all moved outside to their enclosure together with Momo as a new part of the family. Because of her early development issues due to malnutrition, Momo will always be smaller than the others. But, she makes up for it with a HUGE personality.

We have to thank several people that advised us during the whole process with Momo. We contacted several facilities that specialize in lemurs and they were incredibly helpful in guiding us through possible scenarios. This whole endeavor has been a first for CARE – and firsts are always frightening. It is especially frightening when all past experiences and data tells you it will never work. A situation where an unrelated female adopts a strange baby – and then the entire group accepts it – is virtually unheard of. Momo's journey is one of the most remarkable ones in CARE's history.