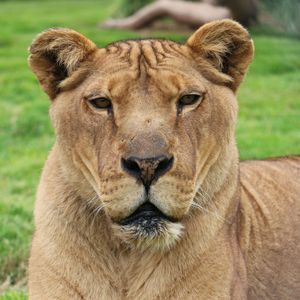 Kiara was due to arrive at CARE with a male lion. However, before her previous owners brought them to us, they wanted to have the male seen for a possible tumor. They performed surgery and it went well but the old male was very slow to wake up. Unfortunately, he passed away during the night, most likely due to his advanced age. We were crushed to hear that Kiara would now be alone.

When Kiara was being unloaded she did not seem very happy, we were told she had a bit of an attitude. We also noticed that she was the most physically fragile of the group. But, she went into her enclosure without much of a fuss and went straight for her toys.

What we have found out since she moved in is that she is the most comfortable and confident of the group. She is both sweet and spicey, and has actually adjusted to live alone exceptionally well.

Kiara still requires a little extra TLC though. She has a skin condition that flares up during allergy season and her teeth are not in great shape. But, she has come a long way from her first day at CARE and is a very strong lady!

To learn more about Kiara's arrival at CARE, click here.