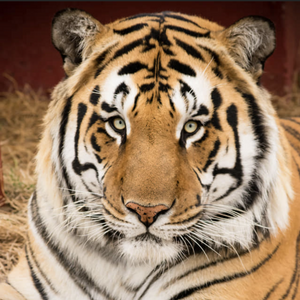 Slade and his brother Boomer are two massive tigers who came to live at CARE in the Fall of 2014 when they were still tiny cubs. They belonged to a private owner in Florida who was looking for a good home for them to grow up and live the rest of their lives. The owner contacted us to see if we would be able to care for them, and the rest is history.

When the boys first arrived, they were tiny and sweet. Once they started getting bigger - and they got A LOT bigger fast - they were always getting into all kinds of trouble! Boomer was usually the calmer of the two, if there even was a calm one, and Slade was constantly going, he never slowed down! As they have gotten older, they have mellowed out a little bit. But the two are still trouble-makers.

The brothers were eventually separated when maturity led to aggression towards one another. They are still neighbors though and still spend time together, just with the protection of a fence between them. They also spend their time snuffling at people trying to get attention, stalking tour groups, and eating a ton!