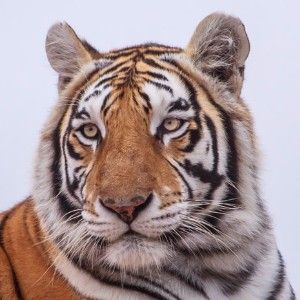 I had only been a volunteer for a day or two when I first saw Allucia. I was in awe of her beauty.  To be honest, all of the animals I have had the opportunity to help care for are some of the most magnificent animals I have ever seen. She really stuck out in the crowd to me, not just with her brothers but with all the other cats. Since it was March she still had some of her winter fluff, which made her cheeks super fluffy. I was drawn in and I fell in love with her fluffy face.

I remember days when I would pull into the drive and the Babies were in the big enclosure at the front of the facility. I would see Jakey and maybe JP up on the big houses. Luca was normally laying off on one of the small houses.  Allucia would be lying out in the middle by the big log. I remember she would never really raise her head to see me, but she knew I was there. I would park and get out, excited to see her. Then I'd come around my truck and she was gone, not where she was laying two seconds before.  As I would walk toward the outer gate of the compound I would see just the tips of her ears above the grass line on the edge of the fence of her enclosure. As I got closer she would lower her head and wait to jump and surprise me. Not jump to scare me but like a “yeah, you’re here finally!” kind of way. She did this often, and I always loved this little game we would play. She would snuffle and rub the fence. The boys would see she was getting attention and come to investigate. They either wanted some loving or, were making sure I was good enough for their sister. It was usually Jake that would get between me and Allucia. I think he was trying to protect her in his own way. Allucia always held her ground making sure they wouldn’t get between us. She was so strong towards her much bigger brothers and never took any stuff from them.

Before, I had gotten to know any of the other cats I felt like she had chosen me, and I had chosen her.  I would always take me longer to get somewhere if I passed her enclosure. I had to stop and chat with her and of course, give her all the attention she needed. There was a very special day that I will always cherish. She was out just lying in the sun.  I sat next to the enclosure and didn’t really call her or anything, I just sat. I was starting to play with the long grass on the fence line when she saw me and came over. She snuffled maybe once and just laid down. We didn’t talk or anything after that. We sat like this for about two hours. I played with the grass and just enjoyed her company and I think she enjoyed mine. This is the way she was to me. She would get down from where ever she was and just come by to give me a drive-by snuffle and rub the fence and hang for a few minutes and then off she went.

Over the last year or so I noticed she wasn’t getting up as much to visit.  As the weeks went by it became less and less. Then I received a call that she was not doing well and was moved to the sunroom for extra love and attention.  While I was out on the weekends I always went and spent time with her.  After the test results came back we knew she was not going to get better. The best thing we could do was spend as much time as possible with her.

On that day we sat together, I made her a grass crown/halo that hung on the rearview mirror of my truck for almost two years before it just fell to pieces.  She was an Angel to me, and always will be.  I miss you Allucia.

Thank you to Heidi, her family, and CARE staff for letting us be a part of these wonderful animals' lives.

Allucia was a small baby, like her brother Jakey, who paled in comparison to the giants JP and Luca. Things have not changed much. Allucia remains tiny in comparison to her brothers, now including Jakey. Don’t let her size surprise you. What she lacks in size she makes up for with her stealth and agility. Although she is independent, she enjoys any love she can get past her brothers who normally push her away with their massive bodies. The best time to be with Allucia is when the boys are asleep!